Tony Ferguson and Conor McGregor coexisted in the lightweight division during the peak of their success. Ferguson had an incredible winning streak and McGregor’s star was on a meteoric rise. At the time they shared an agent – Audie Attar.

This is perhaps why they were never matched together at the time. With the rise of McGregor he was taking Attar along and the two were reportedly partners in a number of business ventures including the lucrative Proper 12.

This is one of the factors for why Ferguson fired Paradigm Sports Management. He went on to claim that they owed him $500,000.

Back in 2019 he sensationally claimed that he is owed $500,000 by Conor McGregor and his former management company Paradigm Sports Management after they ‘manipulated the system to do bad business’ behind his back.

Ferguson went on to sign with the  Ballengee Group – in part because they represent a number of baseball players.

McGregor explained at the time:

“I love Tony. We represented him amazingly at Paradigm sports and were betrayed for a promise of a baseball contract. But frame and preparation here was just embarrassing. His methods and conversation are humorous/enjoyable but he was never the level perceived. Although tough,”

I love Tony. We represented him amazingly at Paradigm sports and were betrayed for a promise of a baseball contract. But frame and preparation here was just embarrassing. His methods and conversation are humorous/enjoyable but he was never the level perceived. Although tough.

Ferguson went on to show up to a number of press conferences with a baseball. 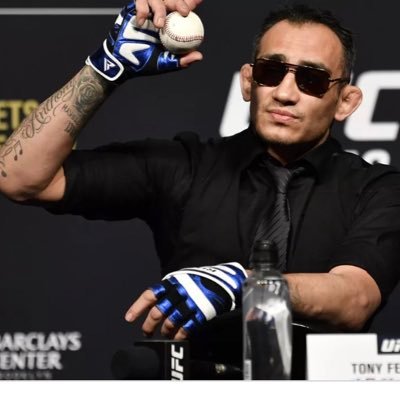 Ferguson had grown up with sports.  His family relocated to Michigan early.  There he took up with American football, baseball and wrestling. He had won a State Football championship in highschool – and he usually wears the ring that commemorates the success. In College he went on to wrestle winning the 2006 NCWA championships in the 165 lbs division.

Ferguson recently discussed his desire to try other sports – and how the UFC thwarted his wishes.

“You know, I’m gonna go play baseball and go do other pro sports. I’m an athlete. I grew up playing different pro sport or different sports at a very high level. ”

“We’re in a state championship football ring right here we were 27 one I come from Grand Valley State University as a wrestler, I want to go do pro wrestling and I got Brock uncle Brock. That’s right there watching me.”

“I want to go do all these couple of things. But then I have this guy right here acting like a fucking d**g dealer telling me I can’t go and do this s**t. I want to go make more money for my family.”

Tony Ferguson is 38 years old. His MMA record stands at 25 wins and 6 losses.