The Joe Rogan / Spotify drama continues to keep on giving.

The controversy surrounding the podcaster has apparently caught up with Spotify’s shares once again.

According to Reuters, Spotify Technology’s (SPOT.N) shares dropped by 5% after briefly making Rogan’s podcast not accessible on the platform. According to Spotify it was just a technical glitch.

“The Joe Rogan Experience” episodes are reported to have been added back on the platform, Spotify has yet to comment on the matter. 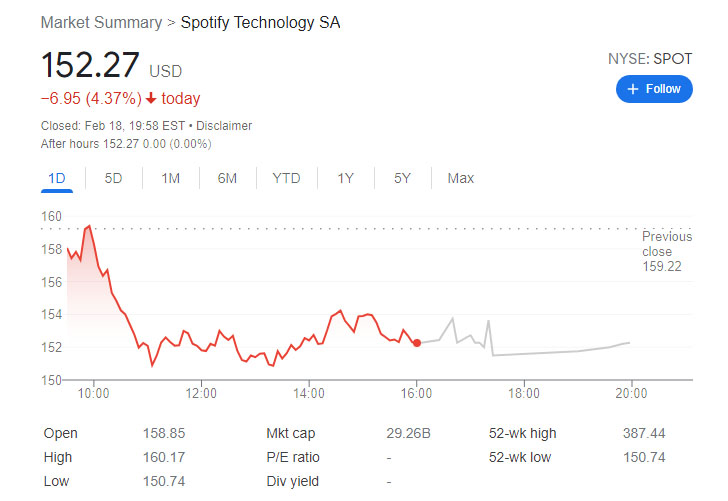 With an estimate of about 11 million listeners per episode, Rogan is one of Spotify’s biggest stars.

Not for nothing, Spotify spent millions of dollars to have the podcaster on its platform.

A rep for Spotify explained the situation, saying, “It’s a technical issue affecting a number of our shows and should be resolved soon.” Indeed, the issue appeared to only impact shows Spotify is behind: The streamer has an exclusive deal with The Joe Rogan Experience, while it also owns The Ringer, Gimlet and Parcast.

Earlier reports stated that the streaming company spent around 100 million dollars to sign with Rogan, but according to the New York Times, the value Spotify spent is around 200 million.

Other podcasts on Spotify – those produced by The Ringer, Gimlet, and Parcast still appear to be missing from the streaming service.

The rollercoaster of events surrounding Joe Rogan has been crazy in the past couple of weeks.

Rogan has been outspoken about his fears regarding the COVID vaccines, while also endorsing unproven medical treatments for the virus (for himself), such as ivermectin.

That led to uproar not only in the medical field but also in the ‘show-business’ as well.

A group of more than 270 medical professionals released an open letter to Spotify to implement a misinformation policy.

To add to the controversy, an artist’s movement against misinformation led by Neil Young also has taken a stand against the podcast.

To make things even worse for the podcaster, a recent compilation went viral of Joe Rogan saying the n-word and also other racist things. That video led to Rogan issuing a public apology.

Rogan has also been pulled last-minute from UFC 271 commentary, in a way for the UFC to avoid getting caught in the controversy.

According to Rogan, “canceling” him isn’t the solution:

"The answer isn't to silence me. The answer is for you to do better."
Joe Rogan pic.twitter.com/zy1zIxQxSB

Spotify has been critical of the scandal, but has also declared they won’t be cancelling the contract with the podcaster.