Paulo Costa has been spending his days trolling on twitter and hopefully preparing for his own bout against former MIddleweight champion Luke Rockhold.

Costa has been heavily criticized in the past over his utilization of the eye poke in addition to the blatant weight miss ahead of Marvin Vettori bout.

“Jason Herzog this guy is bad intentioned. I I repudiate this kind of fake professional. he took 1 point from me in the very first unintentional eye poke. and guess what, fate is cruel. the eye poke much more serious that pedro received he didn’t get a point. you son of a b**ch”

For those unaware, Jason Herzog is one of the best refs in the UFC and routinely gets assigned title bouts.

The job of a UFC ref isn’t prestigious at all with the refs getting an estimated $5000 per bout they referee.

The tweet was accompanied by 4 images – one of which features Trent Rainsmith’s take on the situation that transpired between Costa and Vettori.

To set up his take he first discussed Daniel Cormier’s take on it.

“Now, here’s the thing. The poke in the eye, I get it. But, when he got a point deducted, I thought to myself that Jason Herzog has been watching these headlines. ”

“Jason Herzog has been watching and paying attention to the story that’s going around this fight because everybody hates Costa... he’s like, playing the bad guy, all week. ”

“But when he took the point after one eye poke that really didn’t look intentional to me, it told me that Herzog has been kind of following the headlines and he allowed for that emotion of Costa being the bad guy to make him go a little bit too fast.”

In the clip Trent Reinsmith explains that it shouldn’t matter if the eye poke is intentional or not- it’s an eye poke therefor it merits a point deduction.

Israel Adesanya reacted to the Paulo Costa tweet in a comedic fashion noting that Jason Herzog was a bad guy to have not let Adesanya keep humping Costa in their infamous exchange. 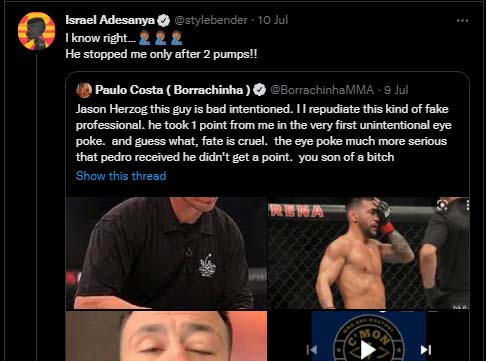 But regardless of Costa’s heel playing the UFC has options regarding the glove and the refereeing in order to curtail eye pokes – they just choose not to because licensing a glove that someone else made wouldn’t be as profitable for them as the current ordeal. Not to mention that the brass seems to oppose anything that would modernize the sport too much  – from open scoring to consistent rule application.

In many ways the UFC is moving closer to WWE than to an actual professional sport in hopes of keeping their profit margins growing for the shareholders.