ONE FC has just concluded its first PPV to date. On the card, was one of their first grappling matches since signing a number of prominent jiu jitsu athletes. Now ONE FC is announcing the two match ups in their Lightweight Submission Grappling event.

MMA veteran Shinya Aoki will be meeting Kade Ruotolo. Shinya Aoki is a veteran of almost 60 MMA bouts at age 38. He’s also previously grappled (and lost) against Garry Tonon in a rare grappling bout they orchestrated several years ago.

Aoki has lost his last bout to ‘Sexyyama’ Akiyama after a good grappling effort. Prior to that he was on a winning spree stretching back to 2019.

Kade Ruotolo hasn’t really ventured far in the world of nogi grappling. Majority of his accolades stems from IBJJF orchestrated Gi evets. This year, he managed to win at ADCC trials despite a crippling neck injury. His brother revealed in an interview:
“There was about an hour between the semifinals and the finals and [Kade] was just laying down curling… He was like ‘dude my neck is pinched, I can’t look left, how am i supposed to compete'”

Another match up that was just announced is one between Garry Tonon and Tye Ruotolo. Tye is a bigger fan of nogi and had previously made his debut at ADCC 2019 where he lost in semi finals to Kennedy Maciel (Cobrinha Jr).

Tye is known for his d’arce choke.

His opponent – Garry Tonon recently lost against reigning ONE FC champion Thanh Le and caused a lot of drama after the fact due to a clash with Le’s grappling coach Ryan Hall.

Tonon was viciously knocked out while pursuing a leglock. He is currently in the process of preparing for ADCC 2022.

ONE FC last featured a grappling match between Andre Galvao and reigning champion Reinier de Ridder. The match was quite uneventful. Here’s to hoping that this round of matchmaking in ONE Submission grappling works out. 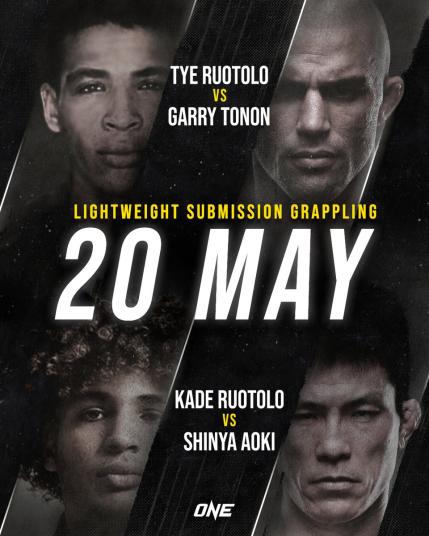