UFC 276 main card started with a clash between Sean O’Malley and Pedro Munhoz. It was a chance for O’Malley to prove he can make it to the big leagues – now that he has a fresh new UFC contract.

The bout was ultimately stopped in Round 2 after the following took place:

To make matters worse, Sean O’Malley did his signature basketball hoop shoot to celebrate the fight being called off – which frankly just felt out of place considering he had arguably lost Round 1.

Munhoz had delivered 26 leg kicks in Round 1 – using the tactic that rendered O’Malley useless against Chito Vera to neutralize the threat. The leg kicks were largely unanswered by O’Malley.

When the eye poke happened, Munhoz was immediately affected as can be seen in the video above. But despite the high def footage of the incident available, O’Malley and some of his fans have an alternate version kind of akin to his alternate universe in which he’s undefeated.
At the press conference after the bout O’Malley shared he ‘believed Munhoz was looking for a way out’:

“He came in there and said ‘I’m going to kick his legs and take him down’, he tried kicking my legs and it damaged him more.”

“He couldn’t get me up against the fence and couldn’t take me down.”

“I was dominating that fight.”

O’Malley subsequently shared the following on his Instagram story.

And he didn’t leave it at that either. He subsequently shared a video claiming that the eye damage was caused by a legal strike as opposed to the above evidenced eye poke. 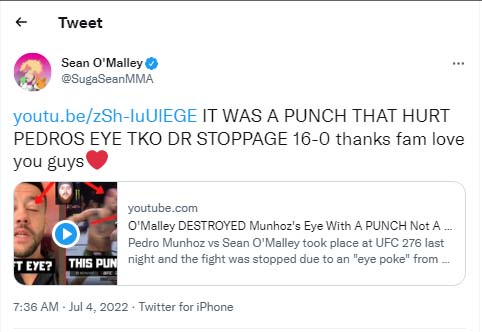 This is a take disputed by UFC staff, not to mention Munhoz himself.

Former Owner WEC – UFC Senior Vice President of Athlete Development and Marketing Reed Harris confirmed:
“At UFC Host hotel this morning. Just saw Pedro Munhoz. For all you doubters out there, his eye is swollen shut. Went to hospital last night and eye is scratched. This shit is real. BTW- he said he knows it was an accident and has nothing but respect for Sean.

Munhoz shared a video update with his fans explaining his eye had to be numbed only to be opened and examined by the doctors. He also revealed he suffered a right corneal abrasion following the accidental eye poke from Sean O’Malley at UFC 276.

“To explain briefly what happened in the fight against Sean O’Malley, I was poked in the eye in the first round but kept fighting, and was hit with a low blow shortly after,” he said (translation by Cruz).

“The fight restarted and we exchanged a few strikes. In the second round, that’s when I suffered another eye poke. I couldn’t see anything for 20 minutes.

“I was taken to the hospital and they used a special eye drop that made my eye numb so they could open my eye,” he continued.

“They did an exam and the medical report I have is that there’s a scratch in the cornea all the way around it. I couldn’t open my eye because of that and couldn’t see anything.”

But infamous UFC casuals are not disuaded by actual proof. Here’s a selection of some of their takes on Munhoz’ injury and how Munhoz is getting treated on his own social media. 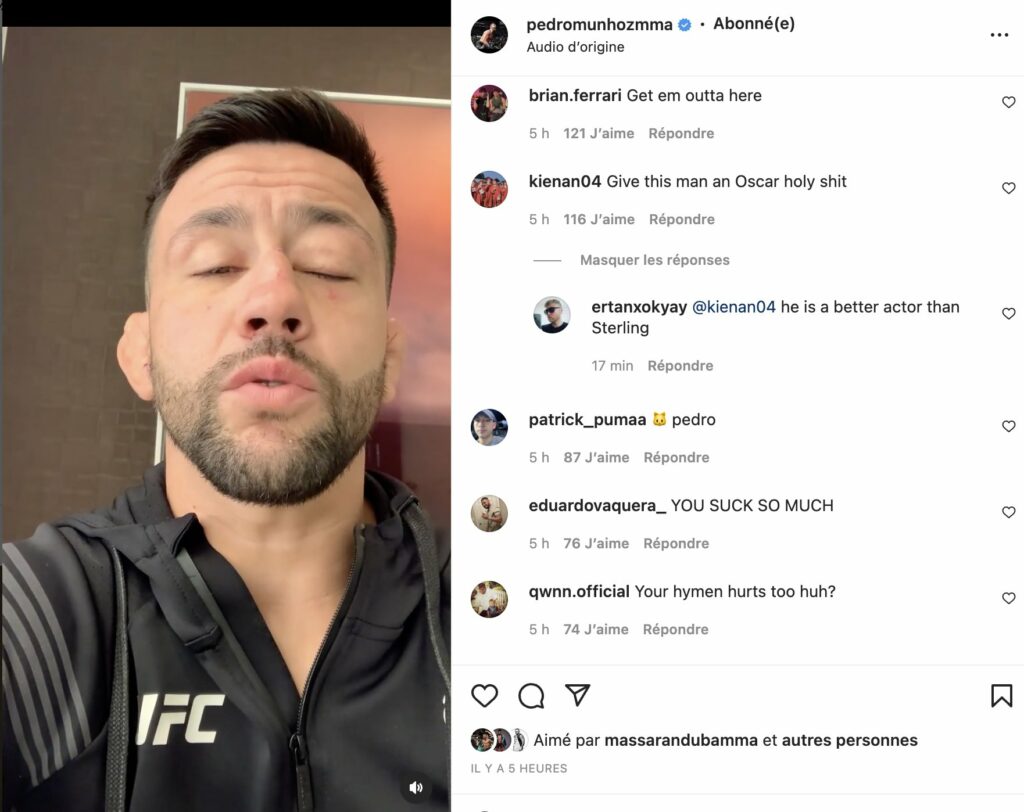 I never rip on fighters in this position cuz we don't know, but Pedro Munhoz definitely looked like he was frustrated and wanted out. #UFC276

Daniel Cormier fought after this and Pedro Munhoz couldn’t after that pic.twitter.com/VGDBhVuKwl

Sean O'Malley pissed off and honeydicked everyone talkin bout "I want the easiest fights forever I don't give a fuck" then takes a fight with top ten ranked Pedro Munhoz and finger flicked his dome beans. #UFC276

Pedro Munhoz when he gets back to the locker room #UFC276 pic.twitter.com/CUnjQHKUCb

Pedro Munhoz: All I see is black #UFC276 pic.twitter.com/rwp4rgiV92

Pedro Munhoz when he has to walk towards the wind pic.twitter.com/Q7VqZvapJu

Congratulations to Pedro Munhoz on getting performance of the night at UFC 276 pic.twitter.com/3qH4LDVDN5