UFC middleweight contender Kevin Holland just announced his retirement. While the jury’s still out on how serious Holland was when he announced that another thing popped out.
Holland recently poked fun at The Rock shoe collab with the UFC that’s been getting a lot of hate from UFC athletes due to the fact that they receive NO compensation to wear them.

Previously, UFC star Nate Diaz literally trashed the shoes during an interview with Megan Olivi leading up to UFC 279 earlier this month. Diaz raised his leg and showed a better view of the shoes and said that the shoes “f*cking suck”.

Not just Diaz, UFC heavyweight Chris Daukaus also criticized the shoes during his appearance at UFC Vegas 60 Recap Show. Daukaus said he is too old for sneakers and even compared Project Rock with Reebok.

He added, “Talk sh*t about the Reebok deal, (but) the quality of shoe with Reebok, way better in my opinion. I’m just not a fan or Under Armour shoes… They just suck. Sorry Rock. You can find me, I’m in Philadelphia. Come if you wanna say something, your shoes f*cking suck.”

Dwayne ‘The Rock’ Johnson has signed a multi-year deal with the UFC to sponsor his workout apparel brand ‘Project Rock’. The deal is for UFC athletes to wear Project Rock sneakers and become a part of the UFC kit. This means UFC athletes and their teams have to wear the shoes during UFC events such as weigh-ins and interviews.

The goal, obviously, is to get in front of potential consumers and build credibility. However, Project Rock backfired by the amount of UFC athletes criticizing the shoes. 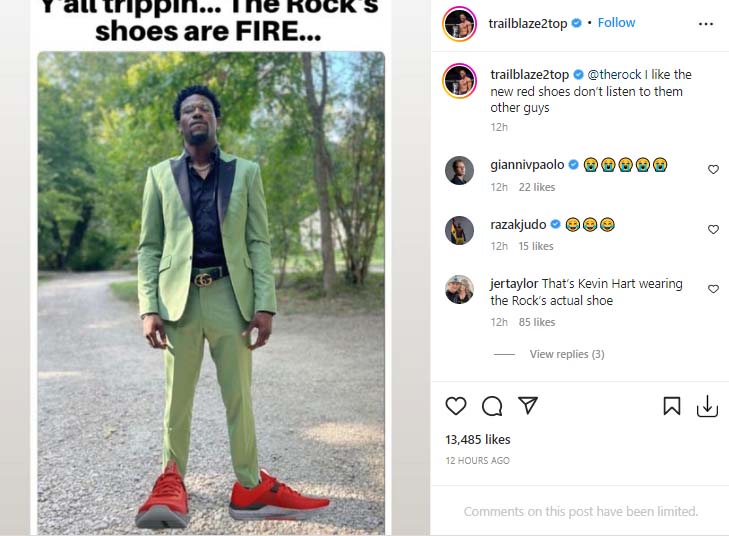 Kevin Holland became the latest athlete to talk about the partnership. However, instead of criticizing the shoes, Trailblazer decided to make fun of the situation. Holland hilariously picked on Project Rock’s side saying the shoes are fire.

He also tagged Dwayne Johnon and wrote, “I like the new red shoes, don’t listen to them other guys.”

“The benchwarmers don’t make that much money. WNBA makes s*it money. And at the end of the day, you guys are fighting twice a year, once a year, and you’re mad ‘cause you only made, like $30K/$40K that year.”

But Holland might not be on the same page when it comes to shoes. During the weigh in session ahead of UFC 279 – he threw his pair into the audience with the camera ineptly panning to something else.