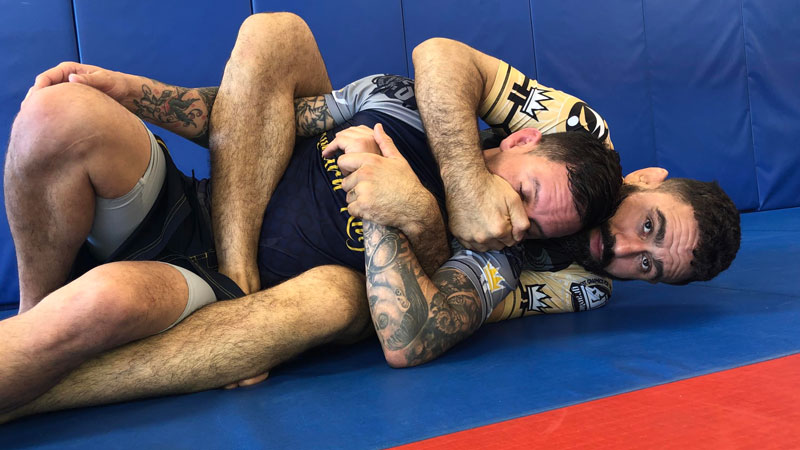 Jiu jitsu has always been in a very strange spot – on one hand it is a highly individual sport where the final outcome is mostly reliant only on personal performance and on the other it is as tribal as they come.

From team rivalries, to hierarchies and martial arts lore, it’s a sport burdened by the community aspect even more so than many team sports. As with most highly hierarchical organizations, it presents a fertile ground for abusers. Additionally, jiu jitsu academies are predominantly populated with males – and they’re more likely to hurl praise on hyper masculine behavior as well as disregard or dismiss abuse claims.

This brings us to 2018 – when the incident at the center of the current scandal occurred. An individual by the name Marcel Goncalves was arrested for allegedly sexually assaulting a minor. Goncalves was 31 at the time- she was 16. The report detailed that the assaults had occurred multiple times at his home on Arbourwalk Circle and again at the Fight Sports gym on Trade Center Way.

When confronted by deputies on Tuesday, Goncalves confessed to having sexual intercourse with a minor and stated “he does not know what is wrong with him.” the newsreport from winknews reads.

Goncalves was the first student of Roberto Cyborg Abreu – an established competitor who claims he is self taught and is a founder of his own association called Fight Sports. At the time of the arrest Goncalves was actively competing in different promotions. With the arrest, Goncalves’ promotional fights fell through and Roberto Cyborg Abreu issued the following statement:

“Sexual assault can never be tolerated. This week we learned of horrifying news about an individual who used to represent Fight Sports at one of our affiliate gyms. The actions of this individual do not reflect what I stand for and he will be held responsible for his actions. My heart breaks for the victim and her family. They know they have my full support. I ask that everyone give the victim and her family space and privacy, as they are going through something no one should ever have to experience.”

As it often happens in the bjj community, many of the commenters requested Goncalves be given due process. For the most part, the case was closed for the outside spectator.

What many didn’t realize was that this statement is in no way reflecting what was happening behind the scenes.

Fast forward to 2021. Earlier this month the man who was at the  helm of ADCC 2019 Mo Jassim, decided to bring light to some of the more disturbing aspects of what happened after. For one, the accused was not barred from training. According to reports and some personal accounts we’ve confirmed Goncalves had been spotted at the Fight Sports academy during closed door sessions.  Jassim also brought light to the fact that the owner of the academy where some of the sexual assaults took place (then Fight Sports Naples) was given an ultimatum – he was to either “buy out” Goncalves for $35000 or to drop his affiliation with Fight Sports, he opted for the latter. This is particularly shocking considering that Goncalves had not financially invested in the gym- he was teaching there and he was compensated for his time from the very start. As such there was no legal obligation toward him.

Now Abreu was catching a lot of flack for this new revelation. This, in turn, led to him issuing the following statement. Whopping 10 pages of legal speak outlined that he would now be stripping Goncalves of his black belt (which is a dubious move but at least it was in the right direction) – and that he’d be forming a sexual misconduct review board to address any future incidents. 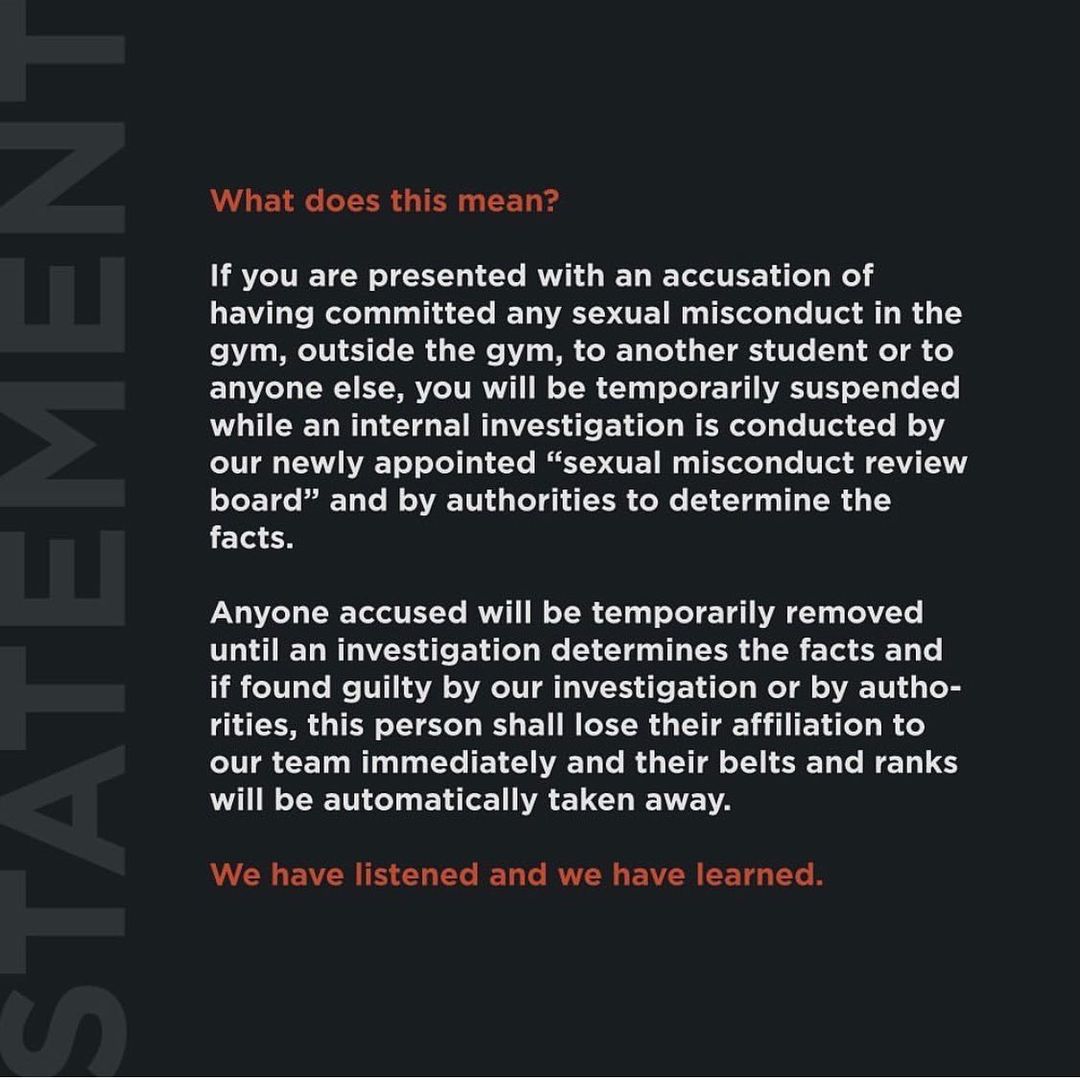 Several things jump right out. For starters the Zero tolerance policy sounds strikingly like the beginning of the first statement – the one made in 2018 – and we all know how well that turned out. Secondly this statement was written akin to something you would see in a Hollywood pr office. It’s all but certain it was written by an attorney. Further it doesn’t really address what Abreu was being called out for, likely intentionally.

The lack of accountability had angered Jassim further, and he opted to share about more incidents that are hushed up by Abreu and Fight Sports.

Perhaps the most startling account is the story of a bjj camp gone wrong in Brazil in 2016. At the camp, a blue belt from Brazil had acquired a duplicate set of keys to the hotel room of the victim and attempted to sexually assault the victim while she was sleeping. She screamed and thwarted the attempt. After the victim went to file a complaint she alleges Roberto Cyborg Abreu came to yell at her. Her own coach was also very disparaging, saying that as there was no penetration “it wasn’t so bad”. The victim succumbed to pressure and withdrew the complaint. This recounting of what took place was corroborated by one of the camp participants mentioned in the story.

In addition to these incidents, Jassim also brought light to a Fight Sports athlete Anderson Hutchinson of Fight Sports Daytona – he is facing charges for having had sexual relations with a 17 year old martial arts student 15 to 20 times. The 2020 news reports refer to Hutchinson as a boxing coach.

Jassim also shared a victim account from Mandy Schneider. Schneider was 16 when Rodrigo Oliveria Da Costa is alleged to have given her alcohol and abused her sexually. There was no police report filed however Abreu did take away the alleged abusers visa so he cannot return to the United States.

Jassim also shared a report dating back to 2012 and some other tidbits. If you’re curious about the specifics of each and every case you should follow his instagram account motar2k .

These instances all demonstrate a clear pattern of abuse coverup.  However it’s still unclear if any of this will facilitate any sort of a change. For starters this isn’t the first huge abuse scandal the jiu jitsu community has gone through before. To understand what’s happening right now you need to understand jiujitsu media and the promotional model it functions on.

In early 2010s Team Lloyd Irvin fractured as a result of a sexual assault instigated by two male students on a female student. The case ended up going to trial, and in spite of video evidence the two were acquitted. But the damage to the team had been done – Ryan Hall penned a letter addressing his leaving of the team. Keenan Cornelius and JT Torres also left the team and joined ATOS. One of the two accused is still involved in martial arts today and is rumored to own a martial arts studio in the state of New York .

But here too, there was a pattern of abuse. For starters Irvin himself was accused of a sexual assault in 1989. And another prominent flag bearer of the team – DJ Jackson had been accused of sexually assaulting a minor.

And sport jiu jitsu is not alone in this. Legends of the sport Rickson Gracie and Rigan Machado were both in situations mirroring Roberto Cyborg’s. Gracie was caught associating with a man convicted of fifth-degree criminal sexual conduct, a gross misdemeanor. After the public outcry he too announced a zero tolerance policy and expelled the man from his federation. As for Rigan Machado – he had a convicted sex offender promoted to black belt and even had him teach at his  academy.

You might ask yourself, why is this relevant? Well in the world of jiu jitsu there’s very little that everyone agrees on. There are no universal rules and there isn’t even a set promotion criteria – the amateur and the professional scene are mostly governed by 3 main entities – The IBJJF, Flograppling and ADCC.

IBJJF is a sports federation, that is, a for profit organization. As such it is mostly geared toward self preservation and financial prosperity. Great ways to get suspended there are to throw chairs at a competitor at a tournament and to physically assault someone. When it comes to other things (which might offend stakeholders which might in turn affect the number of people paying to take part in their tournaments), they’re more likely to fence sit.

Flograppling is a vertical of Flosports. While they masquerade as a media company they’re more concerned with the number of subscribers they’re getting and fleecing corporate investors. For the most part, they pretend that jiujitsu promotions outside of their subscription service don’t exist. They also promote and feature many of the alleged abusers mentioned in this article. It’s highly doubtful they will ever address the systematic abuse covered in this article. Furthermore calling out unethical behavior in the BJJ community is like throwing stones in glasshouses given who flograppling is run by.

ADCC or Abu Dhabi Combat Club is more of a patronage than a promotion. In many ways it is an event designed to keep running at a loss for its patron. The coveted spots are earned via trials on Each continent and in addition to this invites are given to previous medalists and proven professionals. It’s highly doubtful ADCC would moralize or do any kind of affirmative action in this case.

Ultimately the bjj me too moment is likely to end how it started, without much fanfare. Many will leave the Fight Sports team and the Fight Sports affiliation. Besides that, it will be all upto the individual competitor to secure personal sponsors. And as many are supplied on a  personal friendship basis it’s doubtful it will facilitate any type of a meaningful change long-term.