“By the way, if you’re the trans person or several people that slept with Joe Rogan, can you let us know? Because it’s obvious that it’s personal with him. ”

Cenk Uygur is on a hunt for trans people that he is fantasizing had sex with Joe Rogan, and urging these trans people to contact Cenk and tell him all about it: pic.twitter.com/y0ODFvVwuZ

Rogan was supportive of the ‘don’t say gay bill’.

“There’s a lot of f**king crazy people who want to be teachers,” Rogan told guest Gad Saad. “Someone once said to me, or read this, the term ‘groomer,’ a lot of people don’t like that term online, they’re very upset.”

And he got an unlikely defender – Tito Ortiz’ ex wife, the adult star Jenna Jamison.

While Cenk is in pursuit of the individuals Rogan has had trysts with – Jamison volunteered information. 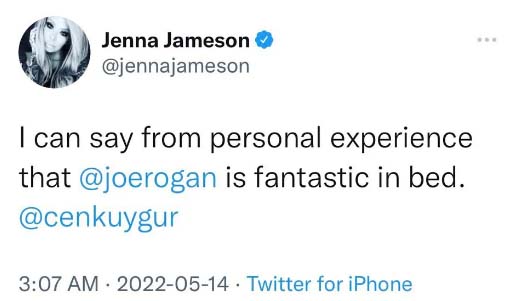 Jameson and Rogan even had an appearance on Howard Stern’s show back in the day and confirmed the dalliance.

Another fan of Rogan’s is the long time MMA goat, Tito Ortiz.