UFC Hall of Famer Tito Ortiz seems to be unsure what to think about the infamous slapping episode at this year’s Oscars ceremony.

In a post made on Facebook, the former UFC light-heavyweight champion praised Will Smith for standing up for his family at the Oscars. But immediately after Ortiz shifted his stance on Instagram where he claimed that the slapping incident was ‘staged’. 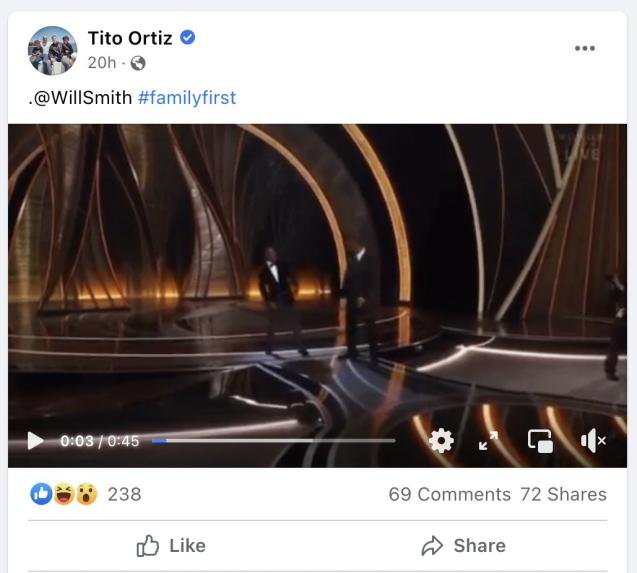 Tito later posted a slow-motion video of the whole fiasco on his Instagram with the caption.
“Here’s the BS slap that was fake! Come on people! #stunt101”

However, This is not the first time Tito Ortiz seems to be confused on a matter.

In 2018, The UFC legend was looking to get a shot at redemption against a man who has defeated him twice in the UFC; Chuck Liddell. During the promotion, Tito Ortiz joined Ariel Helwani’s MMA Show for an interview.

After describing Chuck as one of his ‘boys’, Ariel curiously asked why he still considered Chuck as one of his friends, despite all the bad blood between the two. To which Tito responded with a Chinese proverb: keep your friends close, and your enemies closer. Unfortunately, the context didn’t match his purpose.

Tito’s former manager, UFC president Dana White believes Tito is ‘one of the dumbest creatures walking the face of the Earth’.

In an interview in 2018 with Barstool Dana said:
“Oscar De La Hoya is Elon Musk compared to Tito Ortiz. Tito Ortiz is one of the dumbest creatures walking the face of the Earth right now. If you take all living things and put them in a barrel, Tito is the dumbest out of everything.”

With all that being said, it is not only Tito who believes that the Oscar fiasco was staged. Many notable people including UFC veteran turned MMA analyst, Dan Hardy also believe that the whole ordeal was staged just to improve the ratings of the Oscars ceremony.

If this is true – the Oscars were very successful with their tactics because the whole fiasco spread like wildfire considering that everyone is talking about it.