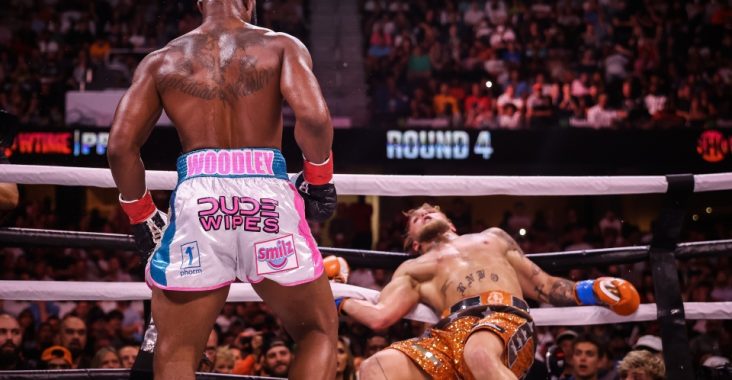 The awaited fight between Jake Paul and Tommy Fury was scheduled for December 18, 2021. But due to a chest infection and broken ribs Fury was forced to withdraw from the bout.

Fury subsequently released a statement regarding his pull out:
“I am absolutely heartbroken that I have been forced to withdraw from my fight with Jake Paul due to a bacterial chest infection and a broken rib. The beginning of my camp was going so incredibly and I never expected anything to come in my way from a victory on December 18th. I can’t express how disappointed I am and I really do hope we can get this fight rescheduled in the new year, I want this fight to still happen more than anything. I’m now regretfully putting my focus on recovery and a further reschedule date.”

Showtime instead tapped Tyron Woodley as a late date replacement for Fury. The fight will consist of 8 rounds and will be fought at 192lb catchweight.

Woodley lost to Paul last time via split decision despite having a chance to finish the fight in round 4 when he delivered several heavy strikes to Paul and effectively landed him on the ropes. Woodley remained calm – perhaps timid considering how he ended his UFC run – and didn’t go for the finishing barrage .

Woodley even demanded the rematch in his post-match interview of the first fight. Jake put a condition that if he gets a tattoo of “I love Jake Paul” at any visible area of the body then he has his rematch. Woodley fulfilled that wish too.

What followed was somewhat predictable. Through the first boxing match with Ben Askren there were rumors Paul was fixing the fight – because it was hard to believe he’d knocked out a former UFC fighter and Bellator champion in record setting time.

To thwart pesky rumors about fight fixing, Paul came up with the solution that will prove the authenticity of his fights.

Jake Paul revealed the solution on the MMA Hour.

“There are rumors going around that everyone sort of has come to believe that my fights are rigged or I don’t allow my opponents to knock me out in the contract .It’s just not true. It’s completely bullsh*t.”

“Of course all these people are going to do is try to discredit me. Because when you’re at the top, that’s what happens. I just want to nip the rumors in the [bud] and give my opponent — contractually, I’m giving Tyron an extra $500,000 if he can knock me out. It just nips the rumors in the [bud] and shows people that all of my fights have been real, are real, and will continue to be real.”

He added:
“It just rips the rumors in the bud and shows people that all of my fights have been real, are real, and will continue to be real,” he explained. “It’s illegal to rig a fight or to stage a fight. It’s illegal to have things like that because it’s fraud. And there’s outcomes. You can’t change the outcome of a professionally-sanctioned bout. It’s illegal. You’ll end up in jail.”

“So the fact that people even say this, we just wanted to squash the rumors.”

Previously the rumors have been addressed by Paul, Woodley’s manager and many other members of the MMA community.