Ngannou wasn’t the only winner of the main event of UFC 270.

Middleweight champion Israel Adesanya was also one of the night’s winners even though he didn’t even fight.

Israel posted on his Instagram stories the betting slip showing that he correctly bet on Ngannou scoring more than one takedown in the fight. 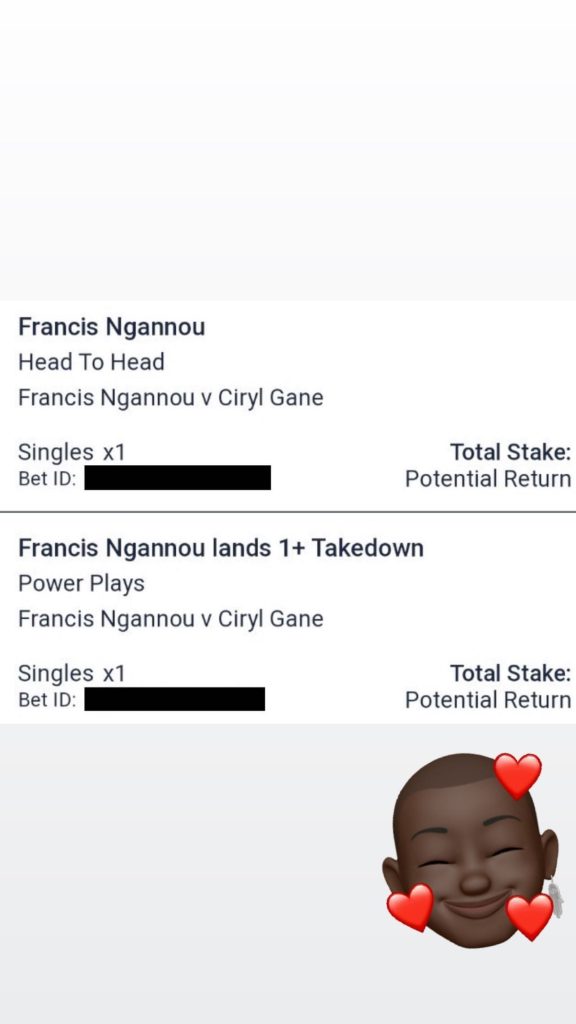 “The Last Stylebender” must have made good money that night. Odds were favorable given that coming into the fight  Ngannou had only one takedown in his entire career, and, in Saturday’s fight alone he was able to score four takedowns.

Adesanya also posted a video on his youtube channel of him reacting to the fight:

The expectation was that the fight was going to take place on the feet, as both fighters have made their MMA career with striking techniques.

However, when you look closely, you can definitely see that Ngannou was improving his wrestling game. Since his move to Extreme Couture, Ngannou worked a lot on his wrestling and grappling.

As an example, look at this comparison between the first Stipe fight, and the rematch afterward:

Notice how in the second fight, Ngannou was much more aware of what to do, how to distribute his weight to defend the takedown, and even attempted one himself against the NCAA Division I Wrestler Stipe Miocic.

Ngannou was already known for dynamite power in his hands, but now with a strong wrestling base, it’s gonna be hard for someone to dethrone the Heavyweight king. In many people’s view, the only person who is going to be able to take away Ngannous title might be mister Dana White himself.

Not in an MMA fight, what happens is that Ngannou’s fight against Cyril Gane was the last fight in his contract. Fans are expecting a renewal with the UFC, but apparently, his agent’s negotiations are not going smoothly.

Francis agent, Marquel Martin has recently shared an image of an allegedly text conversation between him and Dana White, the UFC president is seen offending him with racial slurs, which Martin described as “disgraceful” .

To add to that, Dana White was not there to give the title fight winner his belt. That practice is a common tradition in the UFC and Dana was even there to give Deyverson Figueireido his belt, so everyone was wondering what was going on.

Everyone is looking forward to seeing what the future holds for Francis Ngannou, be it in boxing or MMA, we expect to see the Heavyweight champion performing soon.