As one of the most phenomenal mixed martial artists in the world, Georges St-Pierre is often compared to fellow phenom Khabib Nurmagomedov. Many fans would love to see how Nurmagomedov compares to St.Pierre. Especially since no one ever beat Khabib in his professional MMA career.

Georges St-Pierre recently talked about it during an interview for ‘SecondsOut’. Canadian ace also talked about his career and achievements in the UFC.

“It’s exactly the same reason why the Anderson Silva fight never happened. It’s the UFC. The UFC could have made it, but they had other plans. It’s always a question of timing.” St-Pierre said.

He said that they were always open to the match up but the UFC kept turning them both down. The two veterans couldn’t do anything but abide by what the organization told them.

“And at the time that we wanted to make the fight happen, they had other plans…It’s unfortunate for the fans and for us because that’s where we wanted hope to happen. But the UFC is a business. And sometimes they have to do what is good for the business and not necessarily what’s good for the fans.” St-Pierre added.

“Yeah, Khabib is done. I know that because last time [UFC president] Dana White called me to ask me if I wanted to fight Khabib, I said – I didn’t want to, now; it’s past. But just by curiosity, I said, ‘Let me think about it.’ So, he went on Khabib’s side – because when he approached me, he made it sound like Khabib already accepted. But I knew it wasn’t true, so I wanted to see how things would go. So, I tell him, ‘Let me think about it. I’ll get back to you.’ So, he went on Khabib’s side, and Khabib said no. He made a promise to his mother, and I think it’s a very honorable thing because now we live in a world that everybody is influenced by money. And Khabib gave his word, and stick to his word. So, I think it’s a good thing.”

“And I think I no longer have the intention of competing anymore in mixed martial arts to prove that I’m the champion or the best fighter right now. So, I think that it’s a story that ends well, you know, my career and Khabib’s career, I think it’s a good ending for both of us.”

Georges St-Pierre retired from the UFC in 2019 and has stopped competing since then. However, ‘Rush’ doesn’t rule out the possibility that he might return to the octagon in the future.

“My serious days of fighting are over. Maybe you’ll see me for something different like, I don’t know. It’s always serious because it’s fighting, it’s martial arts. You don’t ‘play’ fighting. But I don’t say never if it would be for a charity or something like this. A novelty fight or something like this. But as far as competing to prove that I’m the strongest man in the world, these days are over. I’m done with it.” St-Pierre said during a talk in The MMA Hour.

Unlike GSP, Khabib has ruled out a return to MMA and even went so far as to dismiss even a grappling match in his own promotion. Nurmagomedov was always complementary of St Pierre,possibly due to the fact that his father was a massive fan. 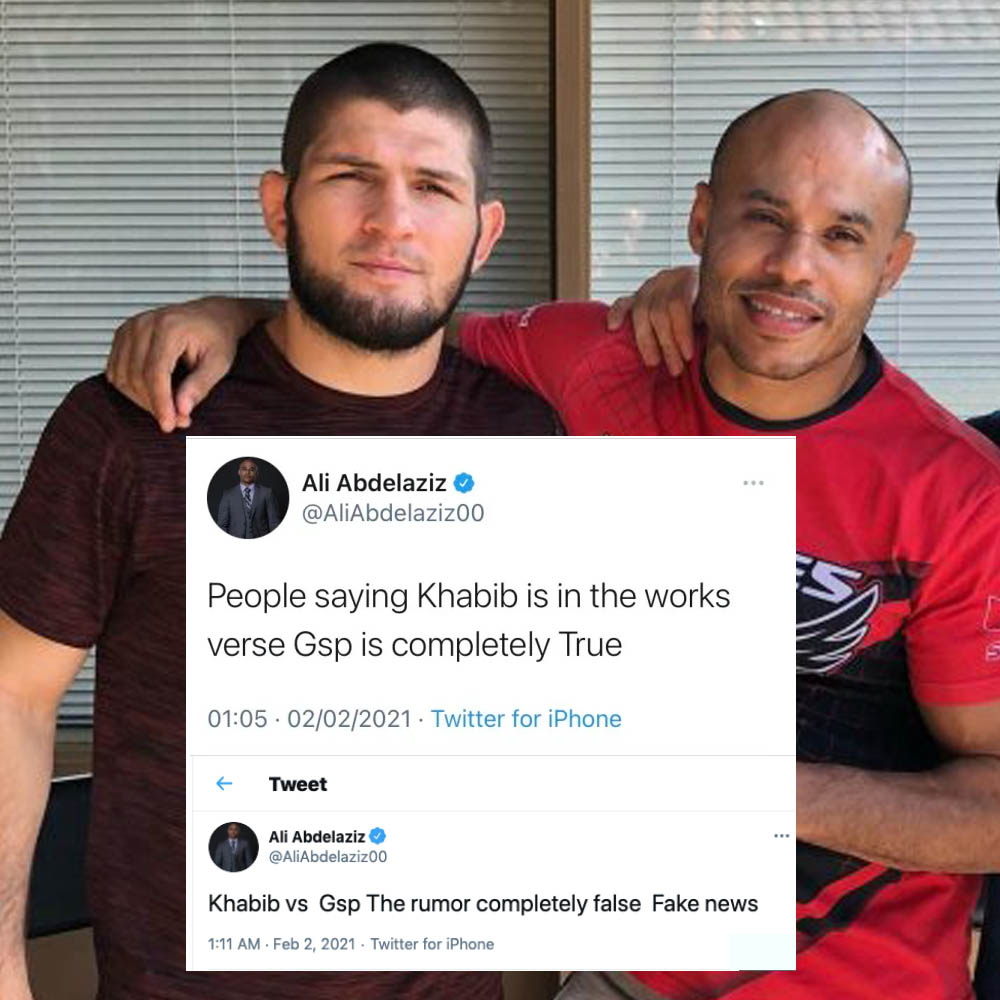 He then deleted the first tweet and followed it up with: “Yes is a complete lie because Dana have no interest or gsp he’s amazing he get to do whatever he wants he doesn’t need to fight.”