Darren Till has been determined to stay in the headlines despite the extended absence from the cage. Till is rumored to be dealing with a knee injury he refuses to get an operation on and as a result has had to repeatedly pull out of scheduled bouts.

Meanwhile Daniel Cormier‘s commentary skills are a very hot topic. Cormier was given a place on the commentary team for being a key team player for the UFC. Any time the question of UFC underpaying their talent comes up, Cormier is quick to repeat his story about an undisclosed locker room bonus (though the last time this may have backfired).

Previously Till criticized Cormier for opting in to commentating UFC 280 that will be featuring longtime teammate and friend Islam Makhachev in title bout against Charles Oliveira.

This time Cormier took it to heart and even wrote a response saying:

“And honestly my commentary doesn’t affect the judges or anything honestly. Most times my team is mad at me because they feel I am too much in other direction. Do better Till!” 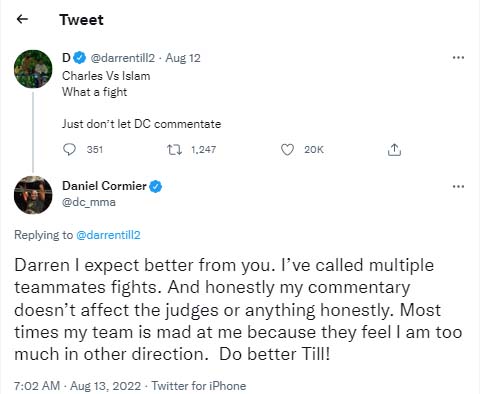 Till went on to apologize and even got DC to backtrack:

But with another event, there was even more evidence of Cormier’s bias. Cormier was visibly upset when longtime friend and co-commentator Dominick Cruz was viciously dropped by a front kick during the main event of UFC San Diego.

Till went on to screen grab and tag Cormier directly on the evidence of his bias. 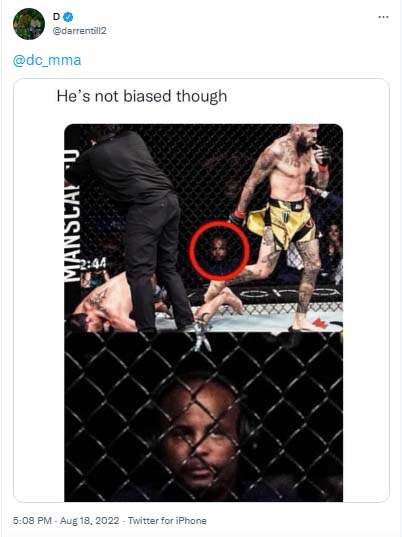 And while TIll might be clout chasing or joking, we’re certainly not. UFC has long displayed their preference of entertainment value over a display of skill however it’s a little much all things considered.