Backroom bonuses have long been a part of the UFC lore that enables the fragment of the fanbase to excuse the promotion for severely underpaying the fighters.

Famously, company man on call Daniel Cormier bragged about receiving $1 million beyond what was agreed on for the Jon Jones bout.

“So when people say, ‘Wow you made $80 to fight Jon Jones and that was a big pay-per-view…’ No, they gave $1 million,” he continued. “I didn’t get PPV (points), I was just a challenger fighting a guy who has defended his belt all those times.”

And this wasn’t the only time either. Cormier went on to reveal he received an additional $400,000 after beating Anthony Rumble Johnson at UFC 187.

But the infamous backroom bonuses are far from where they were during the Fertita times. Despite the UFC multiplying its worth a thousand times over the bonuses are as grim as ever.

Recently UFC fighter Louis Smolka got triggered by a fan defending Dana White’s $250,000 gift to a Youtuber by saying.

“Everybody is hating on this move, he’s worth half a billion dollars and he gave a friend a big gift, with ufc fighters its business and he still gives undisclosed bonuses and always has, he’s taken care of fighters behind the scenes, definitely more than $250k”

Smolka took umbrage to this stellar defense of White adding his own personal experience.

“He said I would have got fight of the night for my debut if it wasn’t for yoel and brunsen, but he would “take care of me” I got excited thinking I was getting one of those big locker room bonuses. They sent me 10k. To this day that is the most I have ever gotten”

Smolka went on to add that even though that was a discretionary bonus, his team still got big chunks of it painting a very grim picture.

“Managers and coaches took a cut of that too. Average undisclosed bonus has been 3-4k personally so from my experience it’s not that much”

In the end Smolka clarified a lot of the nitty and gritty for the fans who were wondering including cost of camp and other expenses. He capped off the tweet spree asking when the UFC fighters will be unionizing. 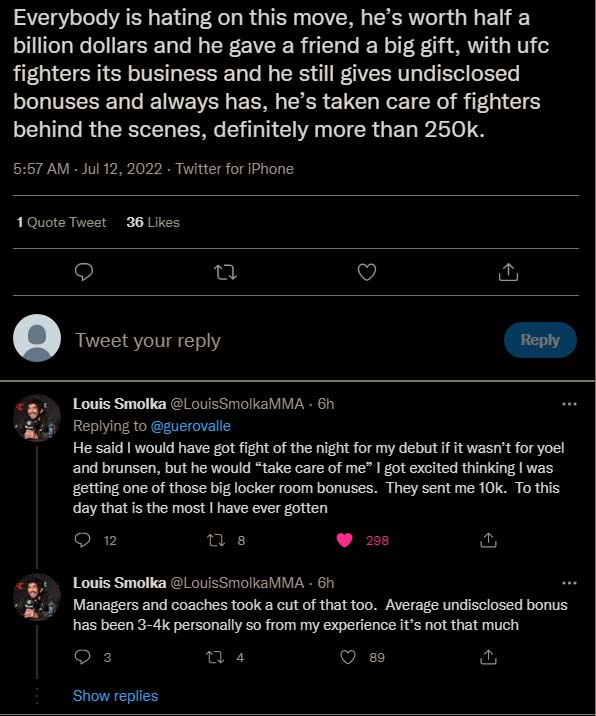