UFC president Dana White was drawn into a feud between Kyle Forgeard and Bob Menery of Fullsend podcast. Menery was considered a recurring member of the Nelk boys but has clearly had a falling out with Forgeard.

White previously made waves once Forgeard shared a video of White gifting him $250,000.

Menery was previously a part of the entertainment company’s podcast Full send and was suspected of helping Jorge Masvidal set up Colby Covington and ambush him in front of a Florida steakhouse.

Once a part of the Full Send podcast team together, Menery alleges he was fired as the program became popular and profitable. Not only has Forgeard praised Menery on the podcast, but recently Menery produced a montage of all the guests who have been on the show.

Menery accused the group for ‘sliting his throat’ with the way they treated his departure and claimed that he was owed thousands for his work. He departed earlier this summer.
Menery shared a compilation of moments where the group was thankful for his participation and contributions on social media.

Dana White reacted to it and was not pleased to see himself included in the montage. On Instagram, White said that he handed Menery $50,000 and warned him to stay out of the “crybaby bulls**t”. 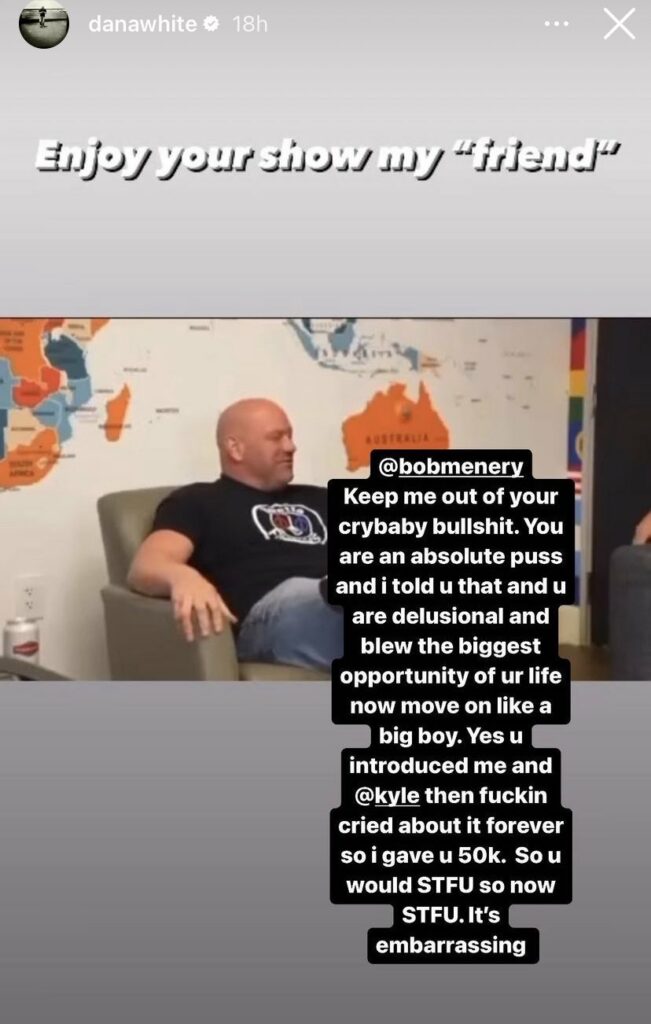 “@bobmenery Keep me out of your crybaby bulls**t. You are an absolute puss and I told u that and u are delusional and blew the biggest opportunity of ur life now move on like a big boy. Yes u introduced me and @kyle then f*ckin cried about it forever so i gave u 50k. So u would S**U so now S**U. It’s embarrassing”

According to the video in which Menery explains his side of the story, he was promised many things that never materialized. His reputation was smeared because of suspicions that he had arranged for Jorge Masvidal to assault Colby Covington outside a Miami restaurant in March.

“It’s actually really comical that he could even try to spin this in any way, shape, or form. Guys, I will resort to this okay? When Kyle and I went into a partnership, we made a commitment and a promise to each other regardless of how successful the show is.”

“At the same time, used my name, dragged through the mud. Telling people I set up Colby Covington and Jorge Masvidal and all this sh*t. It was a bald-faced lie.”

“Bob is saying on social media that we owe him money. That’s a lie. We don’t owe Bob Menery a cent,” the YouTuber started.

Many onlookers online are side eyeing Menery for walking out of such a lucrative deal. As for White, some speculate he’s an investor in NELK’s media company and that might be why he’s opting to weigh in on drama that does not appear to be related to him in any way.