The long-time champion Kamaru Usman lost in the last minute  of his championship match at the incredible UFC 278 event. Although Usman’s defeat has received the bulk of the attention, Leon Edwards’ victory has not received as much attention.

Edwards overcame a deficit on the judges score cards to defeat Usman with a flawless head kick KO. Afterwards, Chael Sonnen voiced some concerns about Edwards’ performance implying that Edwards had cheated. This is especially hilarious considering the amount of infractions Usman had during their five round main event.

“Leon cheated in that match a whole bunch of times. That is not a headline or a topic that is out there anywhere.”

“Leon was frustrated in positions and had no way out of positions to the extent that he cheated repeatedly. Not once – not an accident, not the ref didn’t see it. The ref saw it, the ref warned him, the ref saw it again, the ref stepped in, the ref broke the action five and six times.”

This is very funny considering Edwards was penalized for his single foul while Usman went on to commit at least 10 and receive no penalty.

Usman would go on to hold on to the inside of Edwards’ glove for over 10 seconds.

It was only when Herb Dean was hovering directly over them that Usman released the thumb he had inside of Edwards’ glove.

Jon Anik also noted on Usman’s fence grab saying: “Usman getting away with a little interlock of the fingers in the fence now goes to the shoulder strike.” 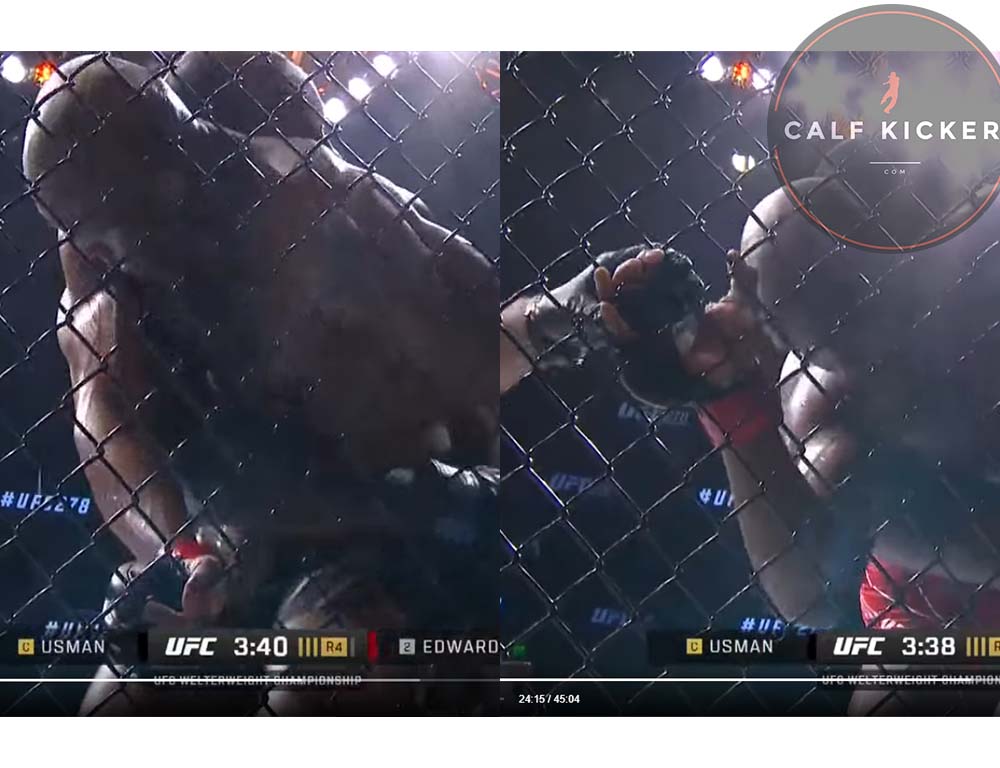 Here, Herb Dean once again caught Usman holding onto the fence. Cormier went on to note ‘Usman got away with it again.’

Despite Edwards’ extensive tenure in the UFC, this was his first attempt at a UFC championship. He played it properly and hit the champion with a terrific shot. Usman lost against Edwards after defending the championship five times. UFC President Dana White believes that this achievement should not be undervalued.

In a news conference for the Contenders Series, White said,

“He became champion with a head kick. He didn’t win by grabbing the fence. that’s completely unfair of Chael Sonnen to say that.“

“That kid sucked it up, dug down deep and landed literally the perfect head kick with like a minute left. So I would say that that’s silly, ridiculous and absolutely unfair to say about Leon.”