UFC welterweight champion Kamaru Usman is represented by Dominance MMA (ie megamanager Ali Abdelaziz). Ali Abdelaziz was a part of the infamous circus preamble to UFC 229 with his sketchy past getting drudged out by McGregor.

Kamaru Usman wasn’t pulled into it until some time later. Abdelaziz is often mocked for running the social media accounts of the many MMA pros he manages. It’s suspected Abdelaziz tried to get into McGregor’s head ahead of Cowboy Cerrone clash in 2020 by making charged comments from Usman’s social media. 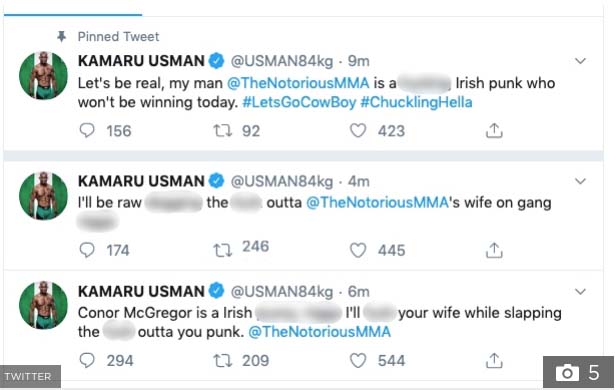 Usman distanced himself from the charged comments and his manager was quick to denounce that either himself or Usman were behind the comments.

McGregor was naturally skeptical and the animosity between him and Usman grew. Usman recently addressed McGregor’s patterns of behavior during an appearance on ‘I Am Athlete’ podcast.

“McGregor can do the whole Floyd (Mayweather) — Floyd been done this. Floyd been wrote the playbook on all of it. McGregor comes out and does it, and guess what? He’s even bigger. It’s different rules for different people.”

“I’ve traveled the world to where I understand it’s different rules for different people. Of course, color plays a role in it. You’re treated differently in different places, and that’s okay. I understand it. This is just the era and this is the time I’m living in. I’m not gonna cry over spilled milk, I’m gonna make the best out of it”

He added, “But I understand that, yeah, there’s certain things that you can and can’t do.”

In addition to this twitter issue, Conor McGregor also teased a move to the welterweight division which likely aggravated Usman further. Not to mention that Usman was long angling for a boxing clash with Canelo Alvarez despite the lack of interest from both Alvarez and the UFC.