Hasbulla Magomedov is a 19 year old Dagestani who became a viral sensation in 2020.
He’s known for his spoofing of fight press conferences along with Tajik singer Abdu Rozik.
Both of them are 19-years-old and suffer from a rare genetic condition that impedes their growth.

Hasbulla has made quite an impact in the MMA community, to the point of even appearing cageside along with Dana White and celebrating along side Khabib and Islam Makhachev in the octagon.

Since the Russian invasion of Ukraine, many athletes and popular figures have voiced their opinions on the matter via social media  including MMA fighters like Jan Blachoricz, Peter Yan, Sean Strickland and many others.

Hasbulla also shared his views regarding the war. The social media star posted a picture in which he is posing on top of a tank, with the captions “We want peace”, followed by a Ukrainian flag emoji and a heart emoji. 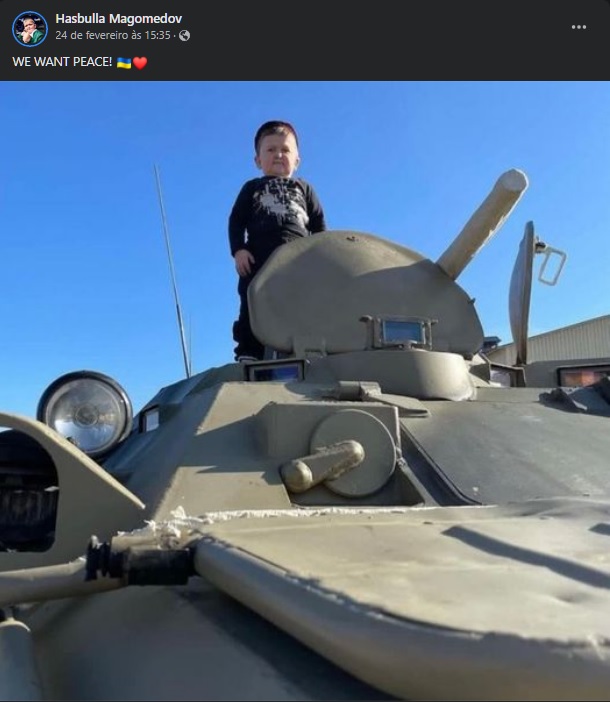 Considering Dagestan is a part of Russia – the controversial post gained even more notoriety.

The star joined the trend as he posted the same picture on Twitter with the captions “The peacemaker has arrived”.

Ever since the conflict in Ukraine began, fans have flooded social media with worry directed toward Magomedov. There seems to be a trend of people posting about saving him from warfare. Magomedov welcomes their gesture.