‘The Notorious’ Conor McGregor is surely living up to his nickname as probably the most notorious person in MMA. But despite that, he seems to have a soft spot for certain people, one of them being the pop star  Justin Bieber.

The Irishman randomly met Bieber on a vacation in the Bahamas.  McGregor noticed someone on a tennis court during a stroll before eventually realizing it was his good friend Bieber.

They would greet one another and embrace each other with a hug.

“I bumped into @justinbieber again today. In the Bahamas!” McGregor wrote on Instagram. “I always randomly see Justin out of nowhere and just chop it up, I love this kid! Two goats on a cliff sideways, just chopping it up, what’s happenin JB my brotha hahah.

“I put it up to the sky this keeps happening, it’s something from above that keeps doing this!
God bless you my brother, great to see you always. Some serve today!” McGregor wrote.

Bieber and the former UFC double champ have been known to be buddies for a while.

Back in 2016, in one of the weirdest beef between celebrities, Bieber started an internet spat with Nate Diaz because of his good friends’ loss to Diaz.

It’s all started right after UFC 196 when Diaz submitted the then featherweight champion Conor McGregor who was undefeated in the UFC up to that point.

Frustrated that his close friend McGregor just lost, Justin Bieber took to Instagram reacting to the fight by dissing Diaz on Instagram saying “his style is terrible” and praising McGregor by calling him “a true champion” who “fights with style and finesse.” 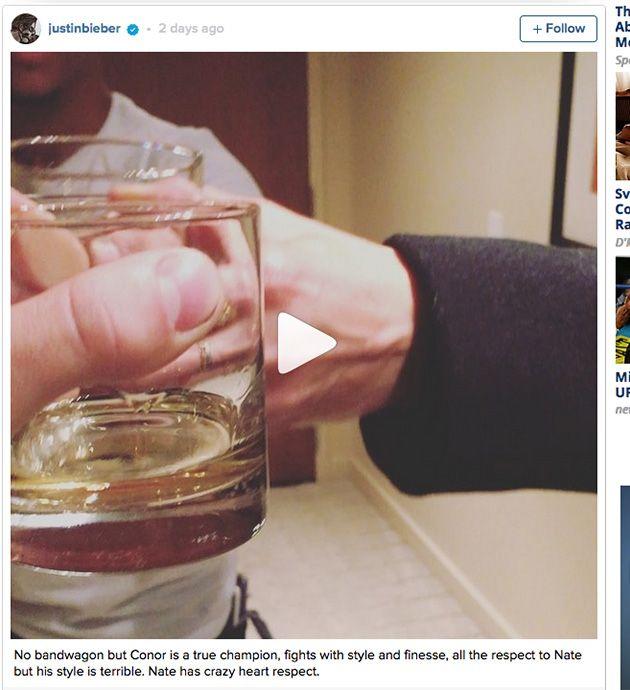 Diaz is known to not take disrespect lightly. He returned fire by posting a meme of him slapping Bieber telling him “Shut Your Bi*ch A*s Up!” with a caption “Biebers a hater.”

Nowadays, they still appear to have a good relationship as both stars made several appearances with each other like when they enjoyed some McGregor’s Proper 12 whiskey together on Beverly Hills after McGregor broke his leg against Dustin Poirier at UFC 264.

McGregor also attended one of Bieber’s concerts in Los Angeles with his family while still handicapped back in July.

“With my beautiful family at the Justin Bieber ‘Freedom’ concert.

“Exactly how big Will Wallace woulda wanted us McGregor’s! Free!” McGregor wrote his fans on Instagram.

McGregor and Bieber might be an unlikely and unexpected duo, but it seems that the bromance between the two is genuine and solid.