Tito Ortiz announced a rematch with fellow UFC veteran Chael Sonnen. Ortiz said their rematch is in the works and will be held at early next year.

Ortiz himself has been calling Sonnen out for a rematch, but Sonnen always dismissed it. However, during a recent talk in The Adam Carolla Show, Ortiz announced that their rematch is in the works.

“But I’ll be competing my one last time in the beginning of February. Tito Ortiz versus Chael Sonnen and number two will be happening.  For freedom fight night. And I’m excited. I’m really excited in mixed martial arts, not boxing and mixed martial arts. Correct at 205lbs. “

Unlike Ortiz, Sonnen has had luck booking spots to be on the commentary team of events. It helps he’s in Dana White’s good graces as evidenced by the recent video where Sonnen implies Francis Ngannou is about to play himself walking into free agency despite recent claims from much less relevant athletes  about ‘stupid money’ there is to be made in free agency.

If the match is to be cancelled it might not be for the worse considering Ortiz had trouble telling which year he boxed Anderson Silva earlier this year.

“His[Silva] boxing career has been amazing. You know, when I took the fight against Anderson, I had a month before the fight to prepare for it. And the whole month was literally a cut weight. And Anderson was a smart guy trying to get me down to 195 pounds.” Ortiz said.

“I’ve never been down to 195 pounds since my freshman year in college. But, making that weight to 200, it was really really hard. If you can understand, I’ve never made 200 pounds since uhh 1999 when I fought Anderson Silva.” Ortiz said.

Ortiz has also been dealing with internet trolls in his instagram comments. One recent post from the UFC goat attracted a commenter calling back to a classic Tito moment in which he exclaimed he’d like to outlive his children.

When Tito Ortiz said he wanted to outlive his children and neither of Bapas cared to correct him pic.twitter.com/HgK8eRxMat 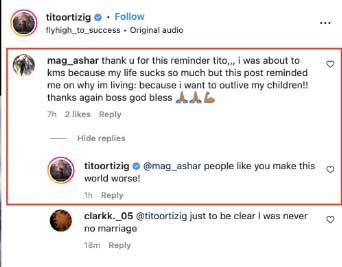