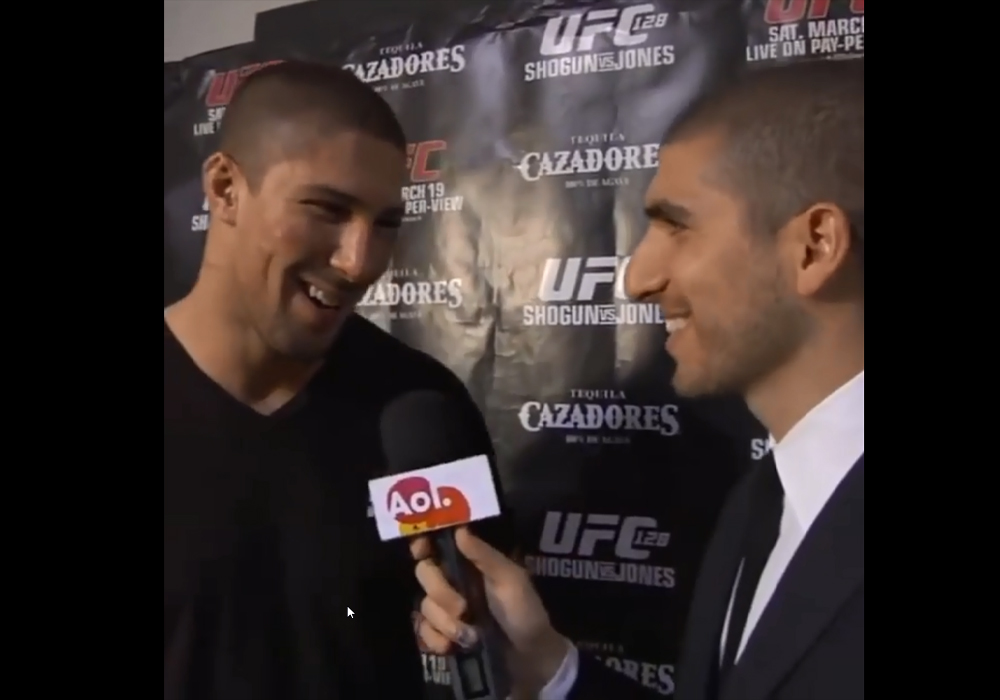 Brendan Schaub has had enough of Heelwani. Following a series of shady comments and online beefing with MMA’s leading journalist Ariel Helwani – former UFC fighter turned comedian and commentator has had enough.

Schaub promptly tapped out and issued what for once felt like a sincere public apology. To rehash the conflict started with Schaub disseminating the story that Helwani was banned from UFC events for reporting on something that was said off the record – a story Helwani vehemently denied for years.

In spite of this Schaub repeated it recently in addition to inferring that the only reason Helwani got a job as a commentator at Showtime for the Jake Paul boxing event was due to Brendan Schaub being busy.

None of this sat right with Helwani who first threw a softball asking for a public apology from Brendan. What followed was anything but an apology. In a segment from The Fighter and the Kid Bryan Callen and Brendan Schaub proceeded to call Helwani sensitive, and be reluctant to comment on the whole thing.

Fast forward to this past week when Helwani went scorched Earth. Schaub was called out for plagiarism, paying guests and conditioning guests to go on one show in order to go on another (implying that Schaub’s pods are a gateway to Joe Rogan Experience).

And going further Helwani made veiled threats that he would talk about Bryan Callens #metoo incident that almost ended The Fighter and the Kid.

As it turned out, this was enough for Schaub who then opted to go for a sincere apology – in order to bury the hatchet.

“I had a straight up conversation with Ariel Helwani. If you’re unfamiliar with the situation – him and I have been going back and forth on our shows. He took to social media, which is fine. That’s his right. More so him than me but we had a conversation – a straight up phone call like two grown ups and I got news for you guys too – I don’t hate the guy. In any facet. Never hated the guy.”

” I think this kinda spiraled out of control, a little bit on his end because when I made those off putting comments about him on the Fight companion which set this whole thing off, and I apologized for that to him. We got this whole text thread. I didn’t realize how bad I hurt – to be honest – I didn’t realize how bad I hurt him. Or it was a sensitive subject for him – which it should be. I’m not saying he’s crazy sensitive I’m saying that’s a sensitive subject for him. And then I’ll apologize on the show… and then I go on the show and I can’t do it on here (below the belt) so I do it on the fighter and the kid. If you look at the tone of the apology I’m joking there. TFATK is a comedy show. Sometimes we miss, sometimes we hit it out of the park…”

“I probably shouldn’t have done it there. But I also kinda had no choice – can’t do it on King and the Sting, that’s definitely not the platform for it. Here? Showtime is not gonna engage in this twitter beef. It’s showtime. They’re like ‘What? what are you doing’ – which I understand too so – I think in context on TFATK it came out as a joke which also upset Ariel. ”

“If they paint a narrative it’s going to be hard to ditch that narrative. And then not only do they paint the narrative but I obviously have friends who work in the organization who they’re getting the same information I get. So if you look at the MMA space there’s maybe 5 of us. It’s like Ariel, Luke Thomas, Brian Campbell, Chael Sonnen, got DC doing the thing now got Michael Bisping – I’m talking as far as this podcast entertainment lane. You have those six guys and if four out of six are painting the narrative to the public that’s gonna be the narrative – and I was trying to put myself in Ariel’s shoes. Let’s say that’s not the narrative but these guys are painting that narrative. You’re gonna be pissed off. You’re gonna be upset. ”

Schaub further reiterated: “I’m not a journalist.” somewhat negating his previous statement. “So I’m just saying what I heard from other people at the event and how it went down. Again I don’t know – I don’t know Ariel that well.”

Schaub concluded: “You won’t hear me painting that narrative ever again. That’s on me man. But again, I didn’t know him and other people told me I knew better but that’s not fair to him. “

Helwani was also really stressed about how Schaub portrayed his work relationships so Schaub’s apology also included this:

“His time at ESPN – he didn’t get fired. I know for a fact, remember I used to work for ESPN so I know a little bit of that lane – not as good as he does but I still have friends that work there. People that work in Bristol and stuff like that. So he didn’t get fired but you gotto realize when him and I are going back and forth … I just don’t like negativity. I just don’t man things are too good. The best job in the world – I have The Best F—– Job in the world. “