Tony Ferguson’s latest appearance in The MMA Hour with Ariel Helwani revealed several interesting things regarding his life. From his plan to continue his education to the call to coach against Khabib Nurmagomedov in TUF in an attempt to end their rivalry.

One of the notable things he discussed was about UFC welterweight Belal Muhammad, who he claimed was tring to steal his looks.

“You know even like Belal Muhammad, I do with just clown all the time on some of the things that I would do with like my sunglasses or like some of the names of my workouts. And now you have this dude just like jocking the s**t out of my swag.”

He also added that Muhammad will never be remembered by the fans for that style.

“I was like: ‘You will never be the sunglasses guy,’ and it was the funniest s**t bro.”

Muhammad  then took to Twitter to react to the claim. He added a young photo of him wearing glasses claiming that he has rocked the glasses since he was a kid.

Tony I been rocking glasses since I was a kid I didn’t steal ur style lol pic.twitter.com/9vF18nlrvM

He also jokingly suggests Ferguson stop mentioning his sunglasses , adding a Will Smith reference to the tweet.

“😂Tony keep my sunglasses name out your mouth” 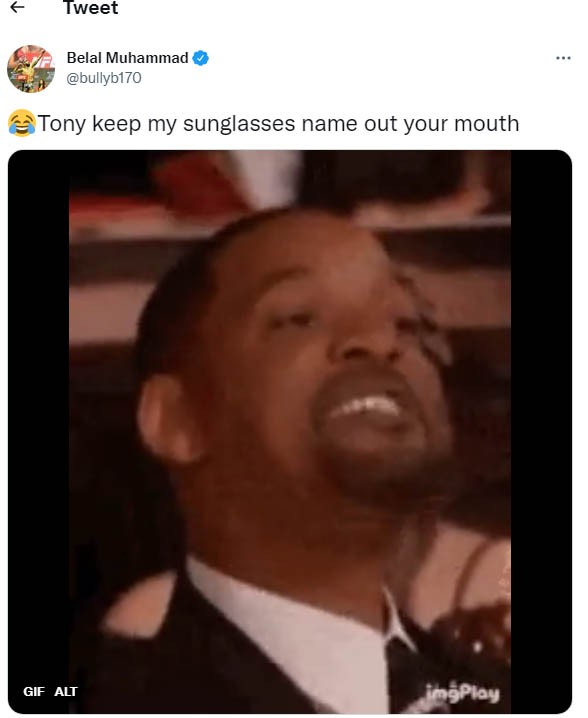 Ferguson last fought at UFC 274 on May 7 on the main card against Michael Chandler. The two crowd favorites were looking forward to ending their respective losing streaks.

‘El Cucuy’ started strong with his striking and dropped Chandler in the opening round. But unfortunately for him, Chandler landed a devastating front kick that knocked Ferguson unconscious early in the second round.

Ferguson has stated that he won’t call it a day just yet. He also revealed his plan to go back to the traditional MMA camp and start sparring again in future.