Paddie Pimblett just scored his second victory in the UFC. For Pimblett, it was very personal considering he got the opportunity to fight on his home territory in the UK. Pimblett is a Liverpool native, as such Justice for the 97 has a special meaning for him.

What is Justice for the 97?

This relates to a famous 1989 incident in which 97 Liverpool fans lost their life in a fatal accident at the Stadium. This is a controversial event in Liverpool history. The accident came to happen when a Police commander made an error that lead to an influx of fans ultimately rendering the stands overcrowded. Initially police fed the press false stories suggesting that hooliganism and drunkenness by Liverpool supporters had caused the disaster. It wouldn’t be until 2016 when the second coroner’s inquests ruled that the supporters were unlawfully killed due to grossly negligent failures by police and ambulance services to fulfil their duty of care.

This isn’t the first time Paddy has led a singalong of Justice for the 97. Previously he did the same thing after he won the Cage Warriors title.

Pimblett is a huge fan of Liverpool FC – so naturally he took the tragedy personally. 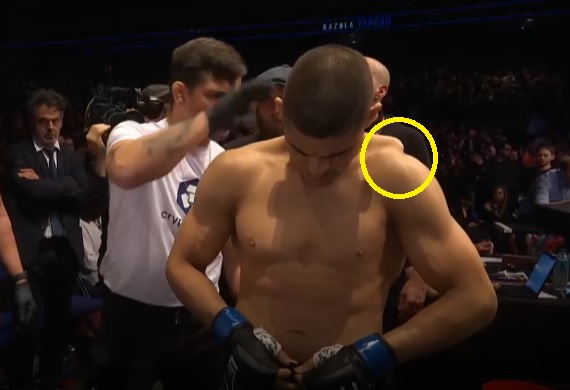 Pimblett was taken down early with Vargas ending up in open guard and advancing to half guard. Vargas believed it would turn out to be a grappling match beforehand. Paddy’s arm was controlled with a strong overhook.

Pimblett was quick to reverse his fortunes landing an impressive takedown on Vargas. From there Paddy progressed to back control – and subsequently Rear naked choke finish.

Pimblett was quick to reverse his fortunes landing an impressive takedown on Vargas. From there Paddy progressed to back control – and subsequently Rear naked choke finish.

PADDY PIMBLETT GETS IT DONE IN ENGLAND!! pic.twitter.com/xpZfXRzwo5