The beating she put on her opponent is reminiscent of the time she shared a story of her encounter with a wannabe robber.

Women on average are physically weaker than men. However, martial arts experience can play a big role when it comes to confrontations between untrained men and women.

A highly trained woman is quite likely to beat an average man with no combat expertise. And Polyana Viana proved this during a robbery attempt.

The incident dates back in 2019 in her home country of Brazil.

Viana was sitting in front of her apartment waiting for an Uber in Rio de Janeiro. Not long after, a man approached her and sat next to her. He then demanded Viana to hand her phone and threatened her.

“When he saw that I saw him, he sat next to me. He asked me the time, I said it, and I saw he wasn’t going to leave. So I already moved my cell phone in my waist. And then he said, ‘Give me the phone. Don’t try to react, because I’m armed.’ Then he put his hand over (a weapon), but I realized it was too soft.” Viana said. Viana doubted that he was hiding a real fire arm and called his bluff. Without hesitation, the 30-year-old unleashed several strikes and locked him in a rear-naked choke.

“He was really close to me. So I thought, ‘If it si, he won’t have time to draw it.’ So I stood up. I threw two punches and a kick. He fell, then I caught him in a rear-naked choke. Then I sat him down in the same place we were before and said, ‘Now we’ll wait for the police.” Viana said.

Viana switched position to a kimura-like hold and waited for the authorities to arrive. Her intuition was right as the man didn’t have a real firearm. The robber turned out to be a habitual offender and has been arrested multiple times.

Viana received praise from UFC boss for her act of vigilantism. 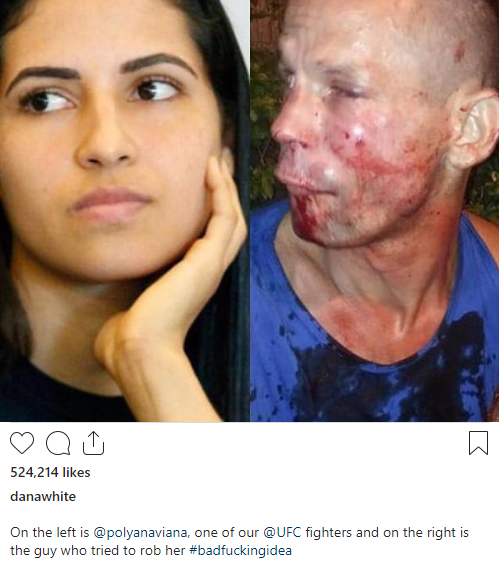 Viana later revealed there was substantial backlash after her act of vigilantism.

“I felt it was cool to show women that we are able to defend ourselves, but I also faced a lot of criticism,” reflected Viana.

“I ignored most of it, it was my life that was in danger and I feel like I did the right thing.

“Doing the right or the wrong thing, there will always be criticism. Overall, all the attention was really good for me.”

Polyana Viana scored an impressive knockout victory against Jinh Yu Frey at UFC Vegas 64 last weekend. With this victory, ‘Iron Lady’ bounced back from a loss against Tabatha Ricci back in May. Currently, Viana has a professional score consisting of 13 wins and 5 losses.