UFC Fight Pass provides a lot of extra content that is great to watch. On Fightpass one can watch plenty of other minor MMA promotions, Jiu jitsu competitions, Combat jiu jitsu and Documentaries on fighters.

However what many might not know is that UFC Fight Pass content is curated by the Fight Pass Czar – that appears to be a real news chiron this person wanted to be identified by and offered no additional info. 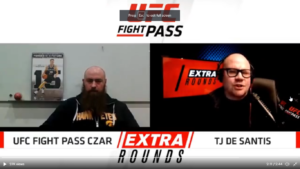 The man in question agreed to be interviewed by another Fight Pass employee – TJ De Santis. De Santis has been a longtime employee of UFC Fight Pass and hosts a podcast on the subscription network. And yet the interview was still a colossal disaster. Not only was De Santis insulted by a man that’s likely his superior but he also had benign questions be turned into an argument.

Must see segment is attached below:

BREAKING! The UFC FIGHT PASS Czar made his first public appearance on #ExtraRounds last night! Get a glimpse of the behind the scenes decision making.@TJDeSantis didn’t get off to the best start with him. Hopefully he will still come back on. pic.twitter.com/8Uhe3tCWbv

Sincerely, a longtime Fight Pass subscriber who doesn’t want to be paying towards the dudes paycheque.

You did a great job as always man, that guy is awful

I really hope that he's putting on a character and that you were in on it.

If not, you're a rockstar for putting up with it.

Was this done as a joke? I don’t get it

De Santis appeared pleased to be getting media attention

I just got a bunch of new followers. One asked me who I am…

If the interview was a skit it was at best a failed skit.

I think this is satire everyone ??

"Hopefully he will still come back on". Everyone who watched this- pic.twitter.com/79Ea8nbBik