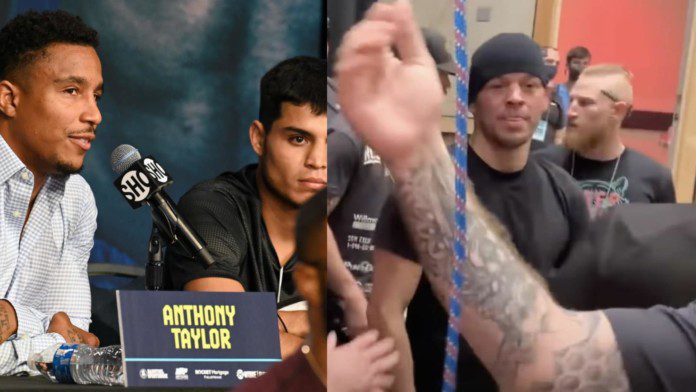 Nate Diaz has never been afraid to throw down. The UFC ace just had his contract be extended by the UFC and is actively angling to fight Dustin Poirier. However – the latest scuffle he was involved with has nothing to do with the UFC.

Nate Diaz was present at the weigh ins of Jake Paul vs Tyron Woodley 2 at the Seminole Hard Rock Hotel and Casino in Florida.

Diaz was there cornering another fighter – when a brawl broke out.

Moments after Chris Avila vs Anthony Taylor faced off with Nate Diaz on stage too, it looks like a fight broke out. Not sure who it was or what happened yet.. #PaulWoodley2 pic.twitter.com/f9RFVtReNS

Conflict was very quickly diffused by the adept security team. Aj McKee is a close friend of Taylor’s and was there supporting him while Nate Diaz and Nick Maximov were in the house to support Chris Avila.

This conflict is a continuation – Nate Diaz is alleged to have tried to confront Taylor back in January.

“Long story short, pretty much I beat Chris Avila, I start showboating in the back room and Nate overheard it, he got mad, threw a water bottle and said, ‘We are going to jump you and beat your a**.’ Excuse my language… Nate ran up on me, he swung at me, he missed, I swung at him… I missed. Bellator staff had to break it up.”