As a young sport mixed martial arts have seen it all – padded records, sensationalist exhibitions and fights featuring professional entertainers. But as the sport grows older it’s growing harder and harder to accept that some organizations will do anything for attention – and often costing the participants their life.

Back in 2021 there was a case of trans fighter being matched with a female. Though at least in that case the trans fighter wasn’t particularly skilled so it was perhaps not as jarring as the recent case that was unveiled in the UK and featured these two fellas. 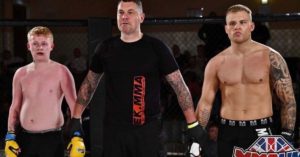 There was also a case we covered last year  where a promotion was caught redhanded orchestrating one fighter fight twice in one night under different names.

But before any of that – there was a match that nobody could’ve predicted. A burgeoning California promotion matched a soccer mom sporting a typical Karen haircut with a future Bellator champion. The result is a disturbing yet highlight reel worthy knock out.

Katie Castro had 2 straight losses at the time, both by TKO – Macfarlane was only making her debut.

Ilma-lei Macfarlane aka The Ilimanator has 11 wins and only 1 loss now – that loss resulting in her losing the Bellator title in December of 2020.

As for Katie Castro – Castro is still listed on her professional record as a win. She hung up the gloves when the controversial video went viral and showcased how XFS aka Xplode Fight Series did their business.

XFS owner was adamant that the virality of the video was a result of the ‘soccer mom’ nickname and had nothing to do with the blatant mismatch.
“We’re looked at under a microscope,” Sharp told MMAfighting. “If my promotion was going on in Idaho, no one would care. It’s definitely true. The only reason this video made it to the surface is because somebody had a hard-on for me. That’s it.”

It’s also no surprise that Castro was a last minute fill in.
“The quality of the fight turned out to be poor and unfortunately we’re in the position we’re in now,” Sharp said. “If that fight ended in a rear-naked choke in 42 seconds, this wouldn’t be the same case.
“Katie’s not a great fighter, but she’s a street fighter. She’s far from a soccer mom. The reason why this has gone viral is because of that word. If they put ‘Street fighter loses to MMA fighter,’ this thing gets 12 hits on YouTube.”