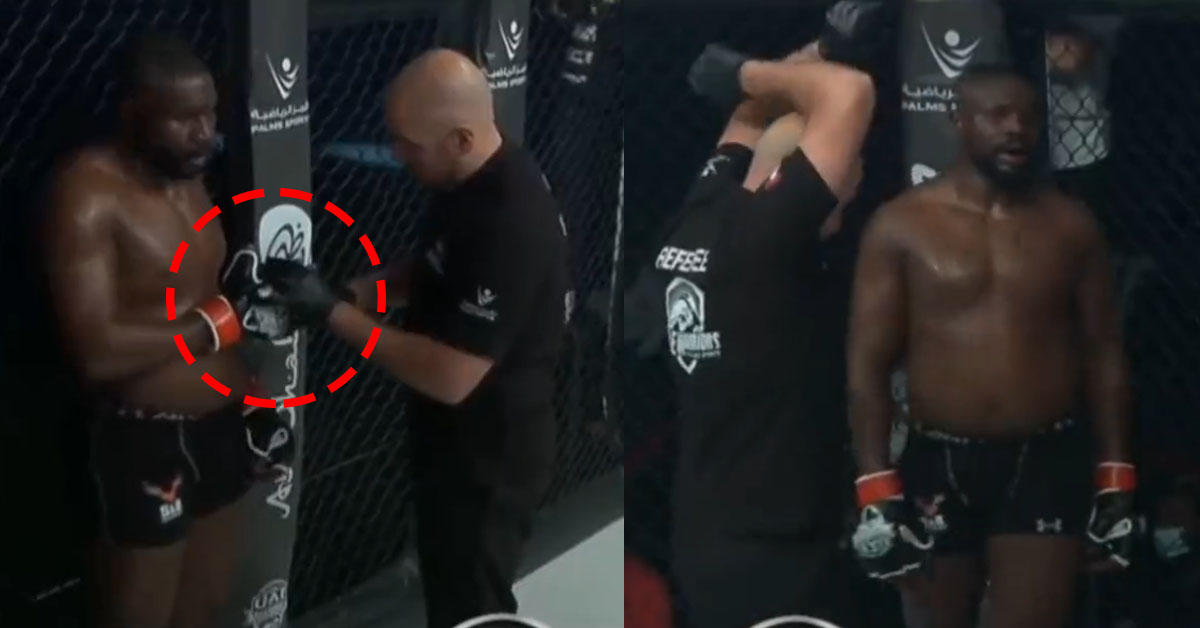 A peculiar disqualification took place in Abu Dhabi, United Arab Emirates in the UAE Warriors 23 last night. Mohamed “John” Juma claimed that his opponent, Sofiane Boukichou, was biting him. As the thing turns out, he was the one who intentionally put his finger in Boukicou’s mouth. His dirty plan was to get the ref to disqualify Sofiane Boukichou.

Mohamed Juma tried his trick not once, but twice. The first time he screamed in pain and claimed that Boukichou bit his hand, but nobody noticed. On the second attempt – the referee was right beside him at the moment.

Luckily, ref had a keen eye. He noticed Mohamed Juma’s trickery and saw that Boukichou wasn’t biting at all and that Juma was the one who shoved his fingers into Boukichou’s mouth. The referee then straight up disqualified Mohamed Juma.

As written in the Unified Rules of Mixed Martial Arts, one of biggest fouls in MMA is fish hooking. Fish hooking is any attempt by a fighter to use their fingers in a manner that attacks their opponent’s mouth, nose, or ears, stretching the skin to that area.

After biting Alexis Angulo, boxer Edgar Berlanga faces a $10,000 fine and a six-month suspension. The two had a super middleweight match at Madison Square Garden on Saturday.

Edgar Berlanga went on to win the fight by unanimous decision. His record currently stands at 20-0.

However, Berlanga seems to be facing a lengthy absence from the ring. He will also have to pay a fine of $10,000 due to his outburst.

The incident in the seventh round was overlooked by the referee. However, it was caught on tape by TV cameras as the two fought in New York.

Berlanga told ESPN: “He was throwing elbows. I was about to do a Mike Tyson on him. He kept throwing his elbows and pushing it out. I didn’t want to get cut.”

Berlanga later expressed regret for his conduct during the match.

“I want to apologize for my actions and what I said yesterday about the Mike Tyson bite.”

“I was in the moment and I got a little ahead of myself. It doesn’t take away from the embarrassment that I have caused upon myself, my team, [Top Rank], and many others.

“I reacted poorly and take full responsibility. Moving forward, I am going to be more mindful and encouraging in my behavior. Once again, I do apologize.”

The New York State Athletic Commission did not seem impressed with Berlanga’s argument. Berlanga has been given a $10,000 fine and a six-month fighting ban. He will not be able to compete again until December.

“If you bite your opponent like you’re a rabid dog you should be disqualified,” promoter Lou DiBella remarked on Twitter.