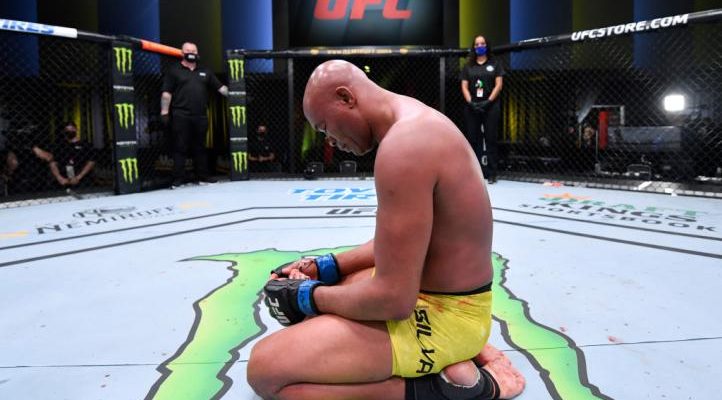 Regarded as one of the Greatest of All Time by many, Anderson ‘The Spider’ Silva might have parted ways with the UFC, but his legacy will always be remembered by the fans and MMA community as a whole.

During his last MMA fight against Uriah Hall on UFC Fight Night 181, the hall of fame announcer Bruce Buffer paid his respect to the old legend Silva with a special introduction and a ceremonial kneel.

“The legendary UFC Octagon warrior, Anderson ‘The Spider’ Silva!’ announced Buffer while taking a knee to the former middleweight champion.

Silva was 45 at that time, but with his extraordinary physical condition, he still move around and fought better than most people his age. He gave his opponent Hall a tough fight for three rounds until the age came up to him as Hall dropped Silva at the end of the third round and almost finished him.

Silva was saved by the bell, but only to be dropped again and eventually finished 84 seconds into the fourth round.

There’s no happiness in the face of Hall when he announced the winner. He later approached Silva and embrace the legend with tears.

“I love you, I’m so sorry,” an emotional Hall said to Silva. “You’re the reason why I’m doing this. You’re still one of the greatest,”

“You can win your title. Just do it. Do your best.” replied Silva to the crying Hall in whispers.

The UFC president Dana White admits that as much as he wanted to give Silva the chance to go out on his own terms, he should not have allowed Silva to fight again at this age.

“I made a big mistake,” White said. “I shouldn’t have let him fight this fight tonight but out of respect to him, he’s a legend of this sport and a legend of this company, I did something that I disagreed with.

“I knew I was right and tonight proved I was right. Anderson Silva should never fight again.” White added.

Anderson Silva’s legacy is solidly cemented as the longest-reigning champion in the history of the UFC, defending his middleweight title for 10 consecutive times and reigning over 2,457 days from 2006 to 2013.