Latest case of ‘robbery’ to get scrutinized is the curious case of Paddy Pimblett and Jared Gordon.

Pimblett was promoted to co-main event after a series of unfortunate incidents caused the UFC 282 card to be significantly re-jigged.

This effectively meant that Pimblett was the most marketable man on the card. His walkout confirmed he has a lot of appeal even in light of his recent flub attacking Ariel Helwani to ingratiate himself to Dana White.

Gordon was booed by an American audience on his walk out, the audience favoring the Liverpudlian.

The clash against Gordon would end up being the first time Pimblett went the distance in UFC. Like many members of the audience, Gordon was dismayed to learn what the judges had scored his co main event against Paddy Pimblett. Paddy Pimblett doubled down and tried to claim in the octagon interview that this wasn’t a close contest.

Pimblett denied: “No, it wasn’t. That wasn’t close. You just consoled me in a fair. But we’ll watch you.”

Pimblett then tried to awkwardly address the recent Helwani controversy saying “Have you consult with me, manager, and see how much you’re paying me for this interview?”

Rogan wasn’t biting and reiterated with a question: “You don’t think with the close fight at all? ”

Pimblett’s octagon interview is by far the most watched clip on UFC’s youtube in the last few days – but Pimblett is getting blasted both in terms of comments and dislikes. 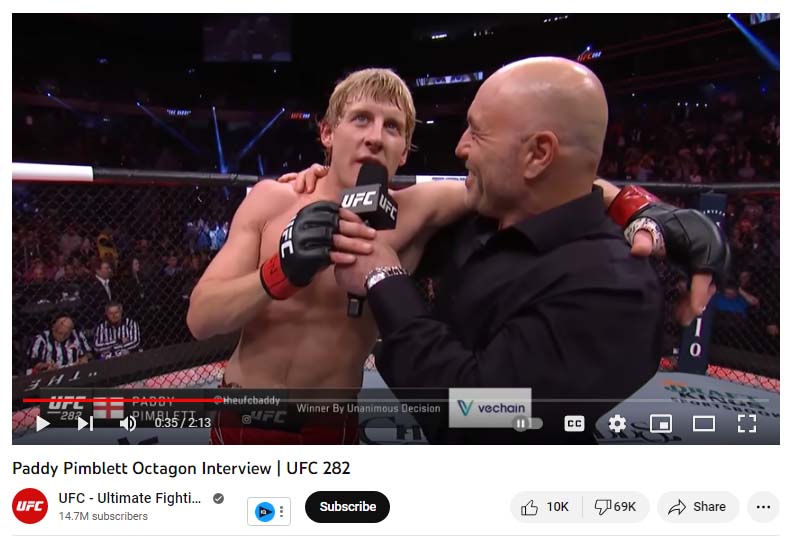 That’s 69k dislikes on the video – somewhat unheard of for a mainstream UFC clip.

Gordon and Pimblett saw each other backstage immediately after.

The two seem cordial at best with Gordon failing to address the issue. In the end he released a statement on twitter adding: