Some may say that fighting is a young man’s sport. While many may agree with that, some old vanguards still choose to defy them. One of them is the French fighting legend, Jerome Le Banner.

Le Banner has fought in kickboxing, boxing, MMA, and has experience in professional wrestling. Since he made his pro kickboxing debut in 1992, he has fought actively for three long decades.

Amassing a record of 6-0 in boxing, 86-22 in kickboxing, and 6-3 in MMA, the 49-year-old is still fighting until this day. And recently, ‘The Bulldog of Normandy’ scored another finish win in MMA.

Le Banner fought at the Mixed Martial Arts Grand Prix on June 4 at Le Havre, France. He faced the 34-fight veteran Ivan Vičić in the main event of the 7-bout card. 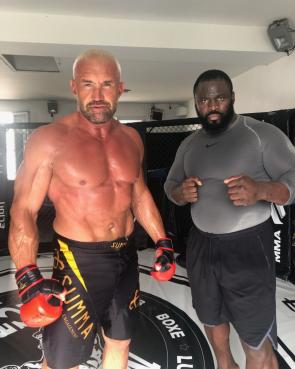 Le Banner started the first round with a takedown in the first minute of the fight. Vičić rose to his feet and attempt to take Le Banner down.

However, ‘Geronimo’ is too strong to be taken down and successfully defend the level change. He then landed some big ground and pounds on Vičić before choking him out with a rear-naked choke, delivering the sixth win in his MMA career.

Although only had nine fights in his professional record, Le Banner has fought in many promotions like K-1, Dynamite, and RIZIN. He also holds a KO win against a fellow legend who still actively fighting, Yoshihiro ‘Sexyama’ Akiyama back in 2005.

Le Banner also starred in various movies like “Babylon A.D” and “Asterix at the Olympic Games”.