Over at calfkicker we pride ourselves on some of our original articles. Two we’re particularly proud of are our investigations into grooming allegations against Pat Barry for his relationship with Rose Namajunas and Aspen Ladd and her relationship with much older boyfriend / coach Jim West.

But when talking about grooming one other high profile UFC female frequently escapes the attentions of the public due to the fact she’s not in the relationship with the problematic coach – her sister is.

Valentina Shevchenko is 34 years old. She’s been the women’s flyweight champion for 4 years – since 2018.

In fact she’s been so dominant that UFC commentator, podcaster Joe Rogan compared her to Anderson Silva saying:

“You’re not just the UFC champion, you’re one of the best champions,” Rogan told Shevchenko.

“It’s very unique to watch you fight because you’re one of those people like Anderson Silva in his prime where you’ve cleaned out your division.”

“It’s no disrespect to your opponents, but some of your opponents, when I’m watching you fight them, I’m not thinking are they going to beat you. I’m thinking, what are you going to do to them?”

Valentina’s older sister Antonina Shevchenko is 37 years old. Now this wouldn’t be as interesting if the two didn’t start training with their coach Pavel Fedotov when they were kids.

On this next picture is an 8 year old Valentina with the 11 year old Antonina and their adult coach Pavel Fedotov. According to Valentina, the two would travel alone with their coach and had moved to Latin America after spending 3 years together on the road – when Valentina was between ages twelve to fifteen and her sister was between ages fifteen to eighteen. 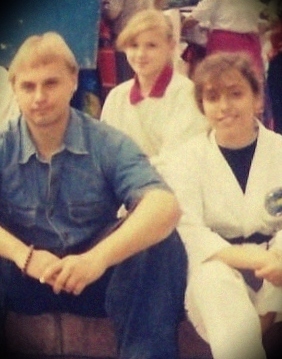 Fedotov was at least 18 in 1988 – and in fact after researching further we were able to confirm that Fedotov was born in 1969 – good 15 years older than his paramour Antonina Shevchenko.

In an interview with MMA Fighting, Valentina Shevchenko painted a damning timeline.

“When I was 15 years old we returned to Russia just my trainer, my sister and I because we love traveling,” Shevchenko explained.

“We were there for like three years and we always competed. I started competing at an early age and when my trainer felt is was too difficult to find opponents in professional fights for me and my sister, he decided that we needed to travel a bit more and experience more.

“And since Latin America is so far from Russia, it was a totally unknown continent in those years because internet wasn’t really a thing and there wasn’t as much information as there is now, people knew very little about how people lived in Latin America.”

And according to an interview they both did with ESPN together – the traveling with the coach started even earlier. According to their account, they would travel with him for three months during the summer break for martial arts competitions every year.

As far back as 2013 – when they were living in Peru – Antonina Shevchenko has been in a relationship but we’re unable to confirm that it was with Fedotov. It’s also quite unclear when the two got married.

In the last couple of years, Antonina visibly took a back seat with Pavel Fedotov accompanying Valentina Shevchenko around the world so much so that that there were rumors of a divorce.