UFC has been more than kind to Miesha Tate, after all, it was revealed Tate stood to earn more than $200,000 for a softball match up against a 40 year old opponent in her return.

Tate is ready to repay in kind and has posted an interesting take on the Dana White’s ‘power’ slap situation.

White was videoed slapping his wife twice in NYE incident in Cabo San Lucas in Mexico. White attempted to spin the incident into an ‘isolated incident’ that occurred after a lot of drinking. Anne White also released a statement in support of her husband.

But even Anne White’s statement wasn’t as rough as Miesha Tate’s. Tate went on to admonish Anne White for instigating the incident:

“If you don’t condone domestic violence it should be admonished BOTH ways. I just don’t understand why it’s not even acknowledged that there is an unrealistic & unfair expectation here.
If you don’t want to BE hit then don’t BE hitting for starters……. end of story.
Now I know some of you are gonna point out the women who are not hitting men and are being abused and that is the worst of the worst and in no way do I condone this or any act of domestic violence for that matter.
But I DO think women need to also be held accountable, if I strike a man (or woman) I am welcoming violence, I have instigated it. In this case I would fully expect to get hit back.
I do NOT understand why this is acceptable behavior. If a woman cannot control her emotions and just decides to hit her man then what in the hell makes you think he will be able to control his after being hit?
Look it’s NEVER right and it’s NEVER ok. But don’t instigate it either or you have to take responsibility for your own actions.
Women…please don’t hit men, men PLEASE don’t hit women.” 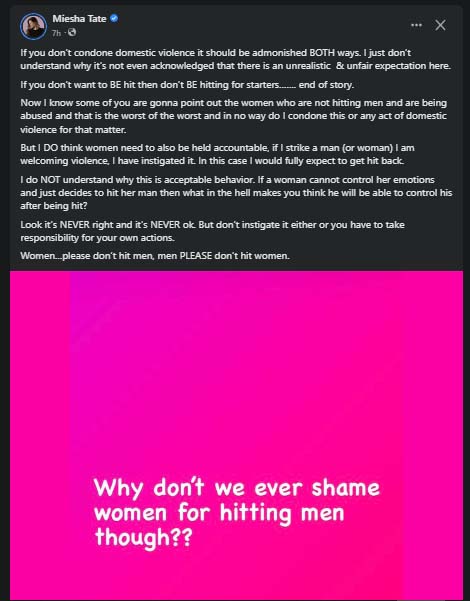 This isn’t MIesha’s first brush with domestic violence. Tate was quick to defend then fiance Bryan Caraway who was accused of having elbowed her opponent Cat Zingano to the head at TUF 17 finale weigh-ins.

“Brian smiled back in my face then elbowed me in the head at weigh-ins. I was pissed. I considered him in that same respect. I am a fighter all the same, but that was dirty and cheap to do to anyone, let alone a girl.”

“They were both in on it, which makes it even more disturbing. If my husband or son ever pulled something like that, I would be their biggest problem. I won’t be bullied nor condone it.”

Zingano’s account was corroborated by her nutritionist and another individual who was present at the time. When Tate was asked about the incident she replied:

“I know Bryan,” Tate said. “Obviously, I would never be with someone who’s a woman beater. I’m a pretty f—ing strong-headed woman and there’s no way. I would kill him in his sleep if he ever thought of it. I would straight up kill him. People saying that blows my mind.”

Tate was also unamused years later when Jon Jones was arrested for his domestic violence incident.