Dana White made a surprise appearance last night in front of the media to once again address his viral incident.

During the media scrum, he talked about the repercussions he’ll face after the incident.
UFC boss seemed apologetic but insisted that there’s no punishment more fitting than being considered a woman beater for all of eternity.

“What should the repercussions be? I take 30 days off? How does that hurt me? I told you guys when we were going through COVID, COVID could last 10 years. I could sit it out.”

He also added that his departure from the UFC would be more negative than positive.
“Me leaving hurts the company, hurts my employees, hurts the fighters. It doesn’t hurt me. I could’ve left in 2016.”

Dana talked about him being labeled as a domestic abuser, and how that’s the only punishment he’s getting.

“Here’s my punishment: I have to walk around for however long I live… and this is how I’m labeled now,”

“The punishment is that I did it, and now I have to deal with it.”

As expected, social media didn’t take too kindly to his comments. The most notable responses are from two UFC veterans, Ramsey Nijem and Al Laquinta.

Nijem, who’s a TUF 13 finalist, tweeted and referenced his own suspension.

“When I was suspended from winning bonuses for 3 fights for cursing at the crowd and wrecking a hotel room, I think the better punishment would have been to be known as a crowd cursing hotel wrecker 😂 @danawhite” 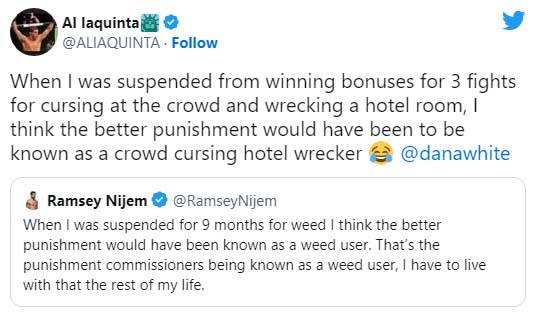 Nijem responded to Laquinta: “Punishing you would have only punished the hotel staff that gets paid to clean the room”

Laquinta continued the banter: “I did it for the staff!!!”