MMA community has been carefully watching what’s happening with James Krause in relation to a recent betting irregularity during the match featuring one of his trainees.

Many fans are skeptical about Darrick Minner’s performance – and if he had a part in moving he line by betting on himself.

As of right now, Krause’s license is suspended and he hasn’t been able to corner any of his athletes since earlier last month.

NSAC and NJSAC are currently investigating while Canada’s provinces Ontario and Alberta already suspended betting on ALL UFC events.

UFC veteran Josh Thomson shared the following on his podcast.

McCarthy offered his opinion by drawing a comparison to insider trading:

“What people don’t realize is that there’s elements to this that are actually considered – it goes under the RICO act. It’s racketeering… It’s like insider trading… There’s elements of fraud that are part of this. There are legal elements here that James Krause could end up in a position where he is functionally fighting for his freedom. This is not a small time thing, this is huge.”

“They’re not just taking what he said on that type of stuff, they’ve gone in and confiscated his iPads, his computers, his cell phones, his records and then if you are someone like [Darrick] Minner, they’re doing the same thing to you… It’s going to trickle down… It’s going to be a matter of time before everyone starts turning each other in. This is gonna get nasty.”

Krause’s problems are only getting started. Even though having his corner license revoked and being prohibited from cornering UFC athletes is difficult.

The most well-known athlete who will be impacted by James Krause’s UFC suspension is Brandon Moreno. Following the UFC’s announcement, the interim flyweight champion sent a message of support for Krause on Instagram. 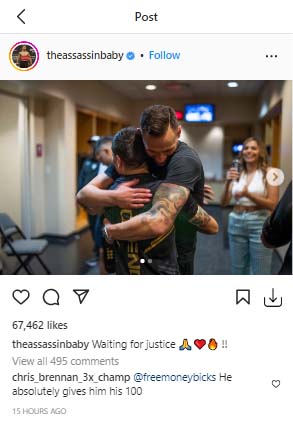