Former UFC welterweight title challenger Stephen Thompson returned after one year being inactive. His latest match was against Belal Muhammad back in December 2021.

Thompson was featured on the UFC on ESPN 42 on December 3. “Wonderboy” took on Kevin Holland and headlined the event on Saturday.

Both athletes suffered a loss in their previous bouts with Thompson suffering two consecutive losses, against Belal Muhammad and Gilbert Burns. Holland lost to Khamzat Chimaev at UFC 279 .

Stephen Thompson was a beast back in the day. However, many fans believed that the 39-year-old has lost his touch in mixed martial arts, not to mention that he is facing a much younger opponent. This made Thompson an underdog.

Surprisingly, Thompson displayed a fierce and exciting action. The pair brawled in a stand fight with Thompson coming out as the winner in the fourth one. With this result, former middleweight Kevin Holland suffered his first loss at the welterweight division.

Despite many fans losing faith in Thompson, Thompson’s former opponent Anthony Pettis was still betting on him. He faced Thompson in 2019 where Pettis famously knocked out Thompson in the second round. The 35-year-old bet $3,500 and collected $8,575. He showed it off to his Twitter account recently. 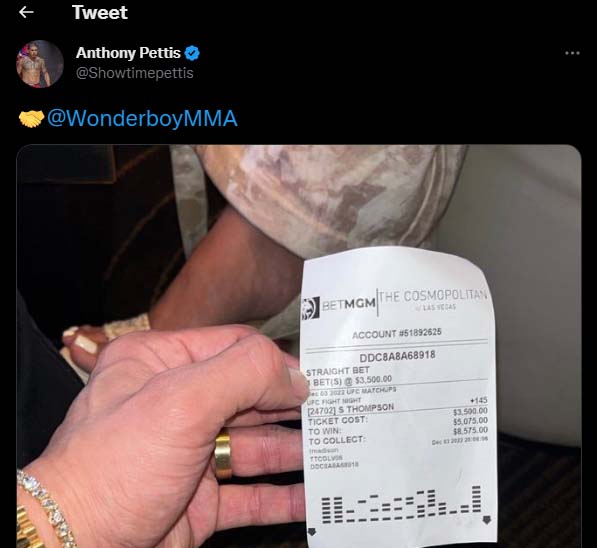 Many UFC athletes would love to bet on their favorite fellow athletes. However, just last month the UFC announced that they prohibited athletes, coaches, and managers from placing bets.

Initially there was doubt about the enforcement of the new policy but following the controversy with James Krause coaching injured Darrick Minner and intense line movement the regulatory bodies are trying to crack down on insider info.

Krause is all but excommunicated from the UFC with a sizeable list of athletes who were training with him now forced to look for a new home.

Anthony Pettis retired from the UFC in 2020 so the ban doesn’t apply to him. He is now competing in the PFL and has gone 1-4.