UFC lightweight fighter Bobby Green suffered a devastating loss against Islam Makhachev at UFC Vegas 49 yesterday. The ‘King’ was dominated as soon as the fight started. Makhachev managed to take him down and got on top of him. While holding Green down, Makhachev rained down ground and pound strikes until the referee Herb Dean stopped the fight.

Green wasn’t taking tons of damage per say – but he wasn’t really defending in an intelligent manner either. Makhachev quite likely read up on his opponent – Green was submitted only twice in his 40 plus fights long professional career and the majority of Green fights go to decision (both wins and losses).

He wasn’t frustrated with this result and praised the Dagestani for his skill and expressed respect for his opponent. However, he wished that the referee Herb Dean would’ve waited a bit longer before stopping the fight. Green was measured in his critique of Dean.

“I wish Herb would have gave me more time I asked him to let me fight.” Green wrote on his Instagram story. 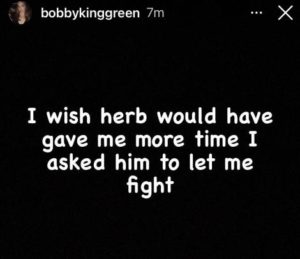 Many would agree that Herb Dean was doing the right thing. During the beatdown, Bobby Green wasn’t really responding nor did he try to counter attack or show any significant effort to escape the position. Green was on the receiving end of roughly 20-25 punches.

Islam Makhachev with another first round finish… Wow that looked really easy. pic.twitter.com/gtkGeTzUtK

Though the fight was fairly one sided, MMA fans appreciate Bobby Green’s effort to step in to replace Beneil Dariush who was originally scheduled to fight Islam Makhachev. Green stepped in on 10 days notice. Green just had a fight on February 12th against Nasrat Haqparast.

As for Islam Makhachev, he seems likely to reschedule the fight against Beneil Dariush. He is currently ranked number 4 in the UFC lightweight division in spite of having just defeated an unranked opponent. Makhachev will likely have to wait as the lightweight champion Charles Oliveira is expected to defend his title against Justin Gaethje in June. On the same card Tony Ferguson is rumored to be fighting Michael Chandler.