UFC 283 ended with two new champions, Brandon Moreno and Jamahal Hill. Moreno settled his heated rivalry with Deiveson Figueiredo in their tetralogy battle. They had been clashing for the flyweight title four times that ended with a draw, one win for Figueiredo, and one two wins for Moreno. They likely won’t be competing again due to Figueiredo moving up to the bantamweight division.

Meanwhile, Jamahal Hill defeated former champion Glover Teixeira for the vacant light heavyweight belt in the main event. Hill dominated Glover for 5 rounds and was announced as the winner via unanimous decision.

The UFC recently updated their athlete rankings on their official website. Brendan Moreno leaped to number 9, having previously sat on number 15. Meanwhile, Jamahal Hill became the newcomer on the list. The 31-year-old is currently sitting on number 13 after being crowned as the light heavyweight champion. 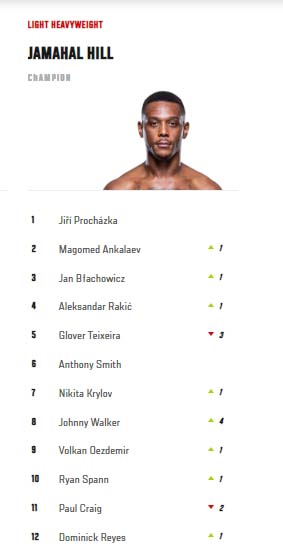 Several other athletes dropped. Dustin Poirier, Jiri Prochazka, and Robert Whittaker got descended by one number. The biggest drop was Deiveson Figueiredo. He fell from number 10 to number 15.

Anthony Smith was another big loser after UFC 283. Smith was in Rio De Janeiro as a backup for the main event – and ended up being the only one to not make weight coming in at 209 lbs.

Hours later he failed to make weight again, this time coming in at 206.5lbs.

UFC athlete rankings are certainly entertaining to see. However, these rankings are quite inaccurate. They also played a little part in matchmaking. The UFC rankings are allegedly determined through a voting by several MMA media members.

“Rankings were generated by a voting panel made up of media members. The media members were asked to vote for who they feel are the top fighters in the UFC by weight-class and pound-for-pound. A fighter is only eligible to be voted on if they are in active status in the UFC.” The promotion explained.

However a bloody elbow investigation into the panel revealed that many of the listed outlets do not cover MMA and some never did in any significant fashion.