Rapper Rick Ross agreed to give 10 million to a boxer who would accept a match with Jake Paul.

Ross was inspired to offer this premium after Paul had to cancel his planned August Madison Square Garden boxing date due to trouble with his opponents.

This challenge was made by Ross to persuade someone to step up against Paul and actually show up come boxing day.

Paul has a successful career in boxing – he has had five victories during his short career. He knocked out his opponents four times in those five victories. Paul was scheduled to face Tyson Fury’s brother Tommy Fury last month. But the match got canceled due to Fury brothers ties with Interpol fugitive Daniel Kineahan which landed them on the no-fly list.

After this, he found another opponent in former sparring partner Hasim Rahman Jr.

Both parties agreed to a match and scheduled a date earlier this month. The match between Rahman and Paul was canceled because Rahman could not match the contracted weight limit. Paul defeated former UFC champion Tyron Woodley the last time he entered the boxing ring.

Ross announced on his Instagram that he would give an extra 10 million to someone who will box  Paul next. Ross shared a photo of him with Paul and wrote a caption, 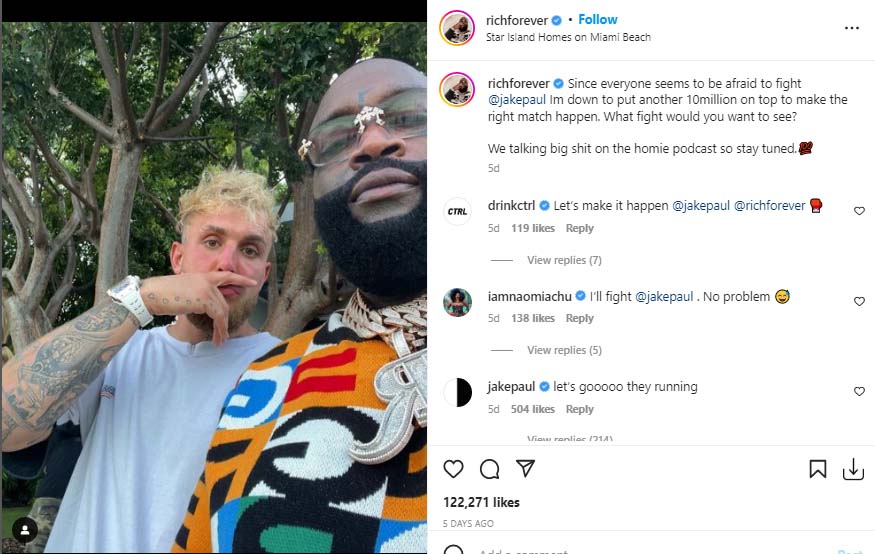 The announcement from Ross got an instant reply from UFC lightweight Terrance McKinney. He said,

“I hear Rick Ross will offer 10 milli to anyone who fights Jake Paul. He said fight but I guess he means just box, either way I’ll do it in his backyard and walk away with his money right now.”

McKinney also took a swipe at Liverpool’s rising star Paddy Pimblett. McKinney has been trying to get matched with Pimblett but UFC appears to be more interested in matchmaking that would allow Pimblett to shine and develop further.

“When you say the words anyone and everyone but don’t back it up.”

He further stated that he is a fighter, not a social media star,

“Must be the same problem paddy has, you want someone with 8 million followers not actual competition. I’m a fighter not a socialite.” Paul made an announcement on Wednesday about his next fight but did not reveal his opponent.

He said,
“Opponent inked. October is mine.”