Before his knockout defeat to Leon Edwards at UFC 278, Usman entered to a Moneybagg Yo song, becoming the most recent athlete to be “cursed” by the rap star during his walk out.

Usman was the reigning welterweight champion and he darn close to breaking Anderson Silva’s 16 win streak.

He was the most recent athlete to succumb to the affliction as he walked out to the song “Big League” by rappers Yo Gotti and Moneybagg Yo. Usman has never before in his UFC career walked out to a rapper’s song. The former champion usually changes his music for every bout.

Medic will face Mike Davis at a UFC event on October 1. He says he would alter his walkout song after the current “curse.”

“Jamahal Hill walked out to Moneybag Yo against Paul Craig and lost, My walkout song against Turner was from Moneybagg Yo and I lost. Usman had Moneybagg Yo in his walk out song and lost. I really like Moneybagg Yo, but I’m not walking out to his music no more…” 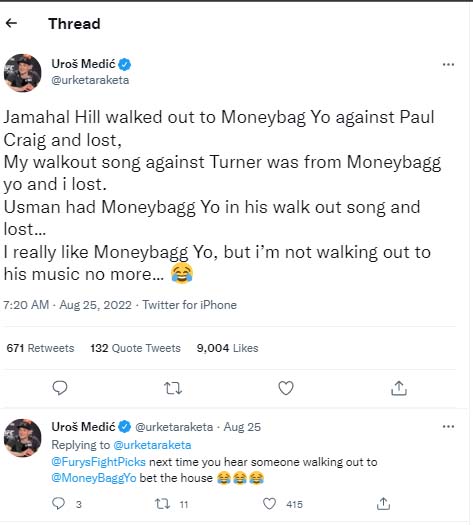 In seven professional bouts, Medic was undefeated. However, Jalin Turner at UFC 266 gave him his first loss last year. Ironically, Medic entered the bout to Moneybagg Yo’s song “Rookie of the Year.”

Top light heavyweight Jamahal Hill altered his music after losing to Craig at UFC 263 in June and walked out to Moneybagg Yo. Hill has won all three of his bouts after altering his walkout song.

It’s not the first time a musician has allegedly “cursed” UFC athletes by walking out to the arena playing one of their songs. Many athletes who enter the ring to the music of rap superstar Eminem go on to lose their individual matches. When Dominick Cruz exited the arena to “Forgot About Dre” before his knockout defeat to Marlon Vera earlier this month, he became the most recent athlete to be impacted by this.