According to a poster put out by the T-Mobile Arena, Jon Jones and Ciryl Gane will square off in a heavyweight championship match at UFC 285.

In a following interview, Jones confirmed that Gane will be his upcoming adversary.

UFC heavyweight contender Chris Daukaus doesn’t appear to be pleased with the Jones-Gane bout. The fourth-ranked competitor Curtis Blaydes being excluded from the championship race is Daukaus’ concern.

If Francis Ngannou was unable to face Jon Jones in the octagon in March, both Blaydes and Gane were being regarded as possible replacements. Former heavyweight champion Stipe Miocic has also been quiet despite being under consideration for Jones’ heavyweight debut. 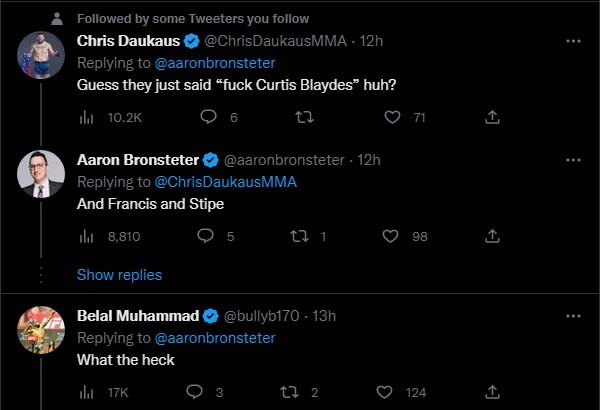 Chris Daukaus claims that Miocic is “done” in the UFC for good. He wrote:

“Thought Curtis was getting it if Francis wasn’t ready by this time. Guess no one knows anything. I think Stipe is done fighting. Source: none”

Since his first title defense against Ciryl Gane at UFC 270 in January 2022, Francis Ngannou hasn’t competed. Since then, Ngannou has been rehabbing his knee and involved in a contract dispute with the UFC, with just the title clause preventing him from being a free agent.

Ngannou may have already become a free agent from November 2022, according to some. There was even more uncertainty when the heavyweight champion’s mother was recently seen wearing a PFL t-shirt.

The news that Jon Jones and Ciryl Gane will compete for the heavyweight title raises greater concerns about Ngannou’s future since the organization just said that Ngannou would be stripped of his title. Chris Daukaus questions if Ngannou’s absence is a result of ongoing contractual issues or after effects from the knee surgery Ngannou endured last year.

“Big questions are surrounding Francis, How is his rehab going, is this just bc of a prolonged rehab? More contract/resigning disputes?”