UFC Fighter Joaquin Buckley came forward in his post fight victory speech confirming what many of us suspected – that having Dale Brown corner him is a publicity ploy.
“When I realized UFC wasn’t promoting like it should, they only promoted well at the end, but I made sure that all the eyes, you see, I got my man right here,” Buckley said. “Come here, Dale, come here! That’s why I brought this man in here, to help promote this fight. I probably never had as many people watching this fight.”

Buckley fought a hard fight this past weekend – he defeated Abdul Razak AlHassan via split decision. In the fall out from the fight he was invited on the MMA Hour. There he backed up Dale Brown once again.

“Dale Brown, shoutout to him man. He’s a cool dude. You know, he gets a lot of, you know, negativity about the things he is doing. But he’s legit, in the self-defense and security game. Like 26 years, you know, was a military paratrooper. So you know, he knows what he is talking about,” Buckley told Ariel Helwani.

“You could definitely use these in the streets. I mean, whatever it takes, whatever you gotta do, to get yourself out of a certain situation.”

What Buckley failed to mention – and is perhaps unaware of is that Brown’s military history is suspect. Our friends over at rudevulture.com uncovered the following:

“The biggest clue about his service, remains an image Brown has posted himself – depicting his young and dapper self below the Airborne School banner. 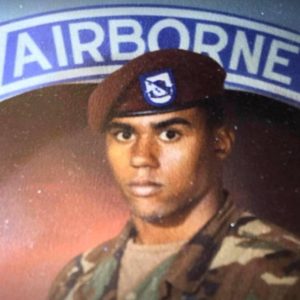 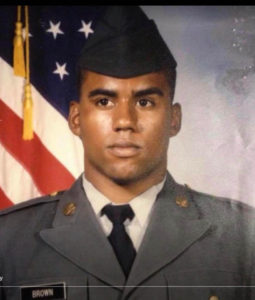 “According to his own account, Brown was raised abroad – mostly in Germany. This meant his return to US could have been somewhat of a culture shock. Brown appears to have finished highschool in Germany. From there, he says he moved on to the US Army Airborne Infantry School. The interesting bit about this part of his background, is that this type of a course lasts about 3 weeks. In fact, the wikipedia for United States Army Airborne School outlines what each week of the program is for. For all intents and purposes, Brown appears to have spent under 2 years in the Army. From the Army, he moved on to Virginia where he became a licensed Private Detective – or so he claims. His Linkedin profile paints a confusing picture, where he claims to have become a PI in 1990 – while at the same time, claiming to have been in the Army from 1989 until 1991.”

Brown has definitely been in the bodyguard industry for a number of years – but that still doesn’t make the techniques he shares online viable. Further, it would be really interesting to find out if Brown was an Army reserve or if he actually served.  It’s unclear at this point.

Meanwhile Buckley gifted Brown with a pair of The Rock UA x UFC sneakers and thanked him for increasing his ‘survivability’.