UFC bantamweight Randy Costa seems to have joined the Paulo Costa fan club. Paulo Costa is a well-liked personality in  the MMA community. This is mostly a result of his humorous social media postings in addition to his ‘take no prisoners’ style in the octagon.

Enter UFC bantamweight Randy Costa. Costa posted a few images from his Wikipedia page on his official Twitter account. It seems like fans had a wild time ‘improving’ the page. The Wikipedia change states that he was reunited with his long-lost brother Paulo Costa, as shown in the screenshots.

The edit claimed that Randy Costa received “Secret Juice” from Paulo Costa in order to help him get stronger and more muscular like him.

Since Paulo Costa carried a bottle marked “Secret Juice” to the official weigh-ins before his most recent bout in August, the joke “Secret Juice” has persisted. Costa is said to have made the remark to respond to those who have repeatedly accused him of taking PEDs (Performance Enhancing Drugs).

However, it should be noted that Paulo Costa is not related to Randy Costa. It’s mostly a run on joke stemming from UFC releasing video of the two hanging out earlier this week complete with Randy’s villain moustache. 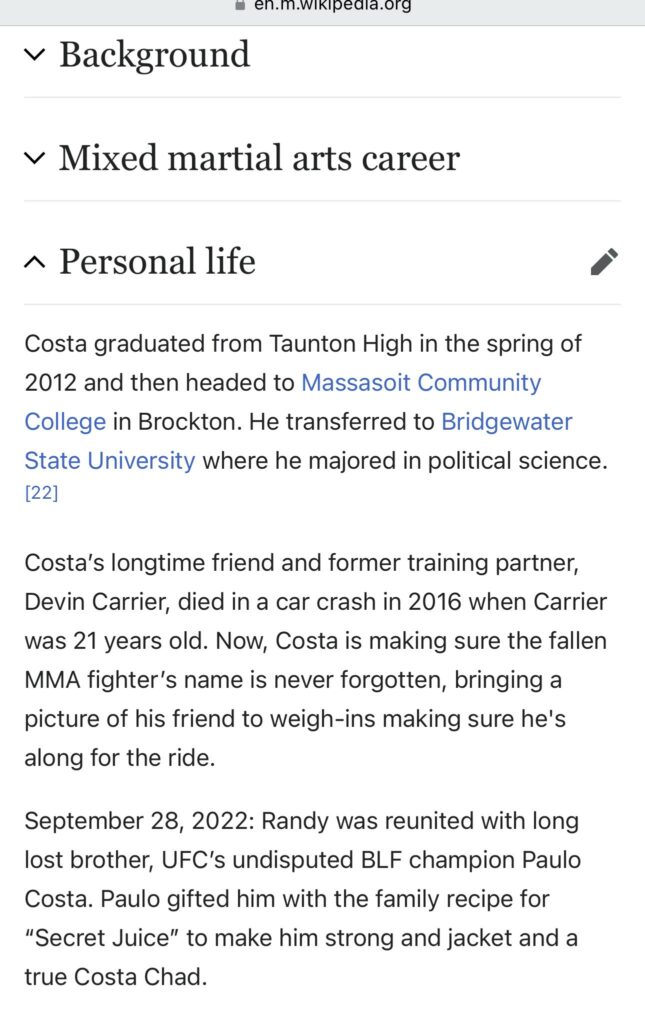 “Someone updated my Wikipedia @BorrachinhaMMA”

On the other hand, Randy Costa will currently face Guido Cannetti at UFC Vegas 61 on October 1. Additionally, the next opponent and precise date of UFC middleweight Paulo Costa’s return have not yet been made public. Costa is confirmed to be on the last bout of his contract.

Ahead of UFC 279 Costa kick up quite a media storm after Chimaev tried to instigate a conflict with him.

Cejudo appreciated Chimaev’s welterweight success but cautioned against putting him up against a top middleweight like Costa.