UFC has announced the line-up for their second July pay-per-view event. The event will include two championship bouts. The American Airlines Center in Dallas, Texas will host UFC 277 on July 30.

The highly awaited rematch between Julianna Pena and Amanda Nunes for the women’s bantamweight belt will headline the fight card. This will be their second main event fight after Pena shocked Nunes by dethroning her at UFC 269.

Considering Nunes infamously holds the record for two lowest performing PPVs to date – it’s very surprising they would have her headline again. Pena and Nunes are coaching this year’s The Ultimate Fighter which has also been struggling to find an audience.

The speculated interim flyweight championship match between Brandon Moreno and Kai Kara-France will ultimately take place in the co-main event.

A heavyweight match between Derrick Lewis and Sergei Pavlovich will also take place during the event. Paulo Costa and Luke Rockhold have been feuding for months and will eventually meet in the octagon.

In addition, Anthony Smith will fight No. 4 rated Magomed Ankalaev in a light heavyweight contest. 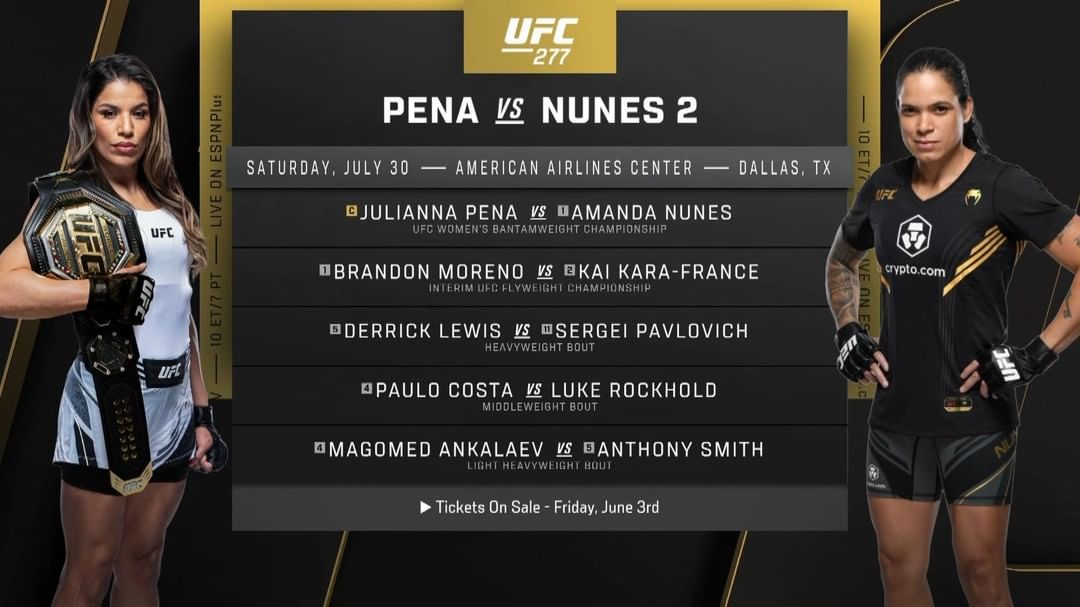 Deiveson is recovering from a hand injury sustained in his trilogy match with Brandon Moreno. The defending champion might be sidelined until the end of the year. However, the flyweight category must move on in the middle of his protracted absence.

Brandon Moreno’s involvement in the interim championship battle is unquestionable, given the two had previously fought three times, one of which ended in a draw. The Mexican won the second match, but Figueiredo won the third and took the title.

In an interesting twist, the two had previously fought in 2019. Moreno prevailed in the match by unanimous decision.

Therefore, the bout will eventually take place. The division will have an interim champion while Deiveson Figueiredo recovers and makes his return.