Nothing seemed to go according to plan for the Blood Diamond tonight. Kiwi-Zimbabwean was initially thwarted by the UFC when the brass refused to let him walk out with the flag.

According to what Blood Diamond was told – Zimbabwe flag was not approved. Adesanya quickly confronted the staff about the weird snafu.

Adesanya prompted requested he be allowed to talk to Dana White.

Flag of Zimbabwe appears to have two variations.

This flag was reportedly adopted 40 years ago.

Previously Zimbabwe had the following flag:

The country now known as Zimbabwe was formally known as Southern Rhodesia from 1895 to 1980 and it used to be an English colony.

Things went south from there too with the Blood Diamond getting choked out in his UFC debut.

The fight started at a crazy pace, Jeremiah Wells slips and almost puts himself in trouble in the very beginning of the fight.

Not exactly the start Jeremiah Wells was looking for 😅 #UFC271 pic.twitter.com/xTRFhAsB1G

However, after that, Wells quickly took control of the fight.

Jeremiah showed that his grappling skills are leagues above his opponent.

In a matter of minutes, he took the New Zealander down, got to his back, secured a rear-naked choke, and put him to sleep.

Apparently the flag mix up is all thanks to Edmen Shahbazyan. Shahbazyan reportedly displayed the flag of the Nagorno-Karabakh Republic before his fight with Derek Brunson, which upset the government of Azerbaijan. This all happened back in 2020.

Shahbazyan is an Armenian and most people watching the fight on Aug. 1, 2020 just thought he was displaying a provincial flag as he was introduced in the cage. But it turns out the truth is way different – the flag he displayed was of the Nagorno-Karabakh Republic, an internationally-unrecognized breakaway region technically belonging to Azerbaijan. 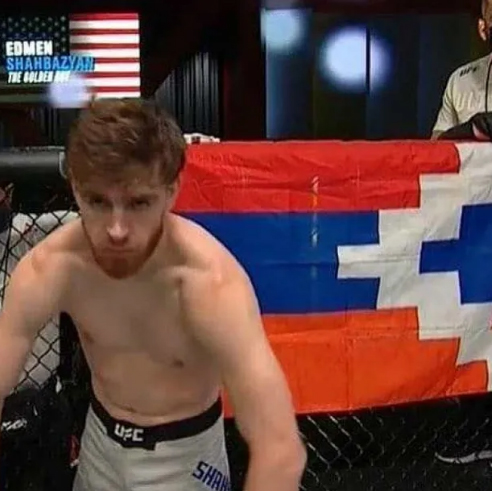 According to AXAR.az, “The Armenian athlete and his coaches apologized to the UFC,” “Reebok immediately stopped cooperating with the provocative Armenian and refused to finance it,” and “Dana White expelled from the UFC a 20-year-old employee who allowed the so-called flag to enter the ring.”

So Edmen lost his Reebok uniform compliance money ($5,000) and an intern who allowed for the snafu was sacked.