Tyron Woodley has tasted that sweet influencer boxing money and he doesn’t intend to just give it up. Woodley has had two bouts against Jake Paul, with the second one ending with that unceremonious knock out.

Woodley is a former UFC welterweight champion – but he was never really known for his striking. The real danger with Woodley came from wrestling. This makes him a soft target for all of these influencers who are turning to celebrity boxing.

And Paul is pretty much the top of the food chain – which is how Woodley found himself invested when British youtuber KSI sent a contract for a boxing date.

KSI (real name JJ Olatunji) returned to boxing in August when he defeated Swarmz and professional boxer Luis Pineda. KSI had trouble finding opponents after his initial opponent had a concussion – and the first replacement was spotted with some supremacist tattoos. This is how he ended up boxing a rapper novice and an actual boxer in one night.

Since then KSI has been bickering with the younger Paul non stop but with no plans to end the rivalry in the squared circle.

He first wrote: “Warned this b****! KSI, Why would you offer me a fight vs you then bail? Why would u send me a contract to b**** out and take a lesser opponent? Why would you have my name in your mouth for two years and not step up? Why do a poll of one million people, that all said fight me, and you run.”

The contract reads: “Maximum of 175lb at the official weigh-in on the day before the bout, and shall be a maximum of 185lb in the afternoon on the day of the fight. Promoter will use best endeavours to ensure the local commission administer this second weigh-in. If the boxer is overweight at either weigh-in, the promoter will be given the option to terminate the agreement and cancel the bout.” 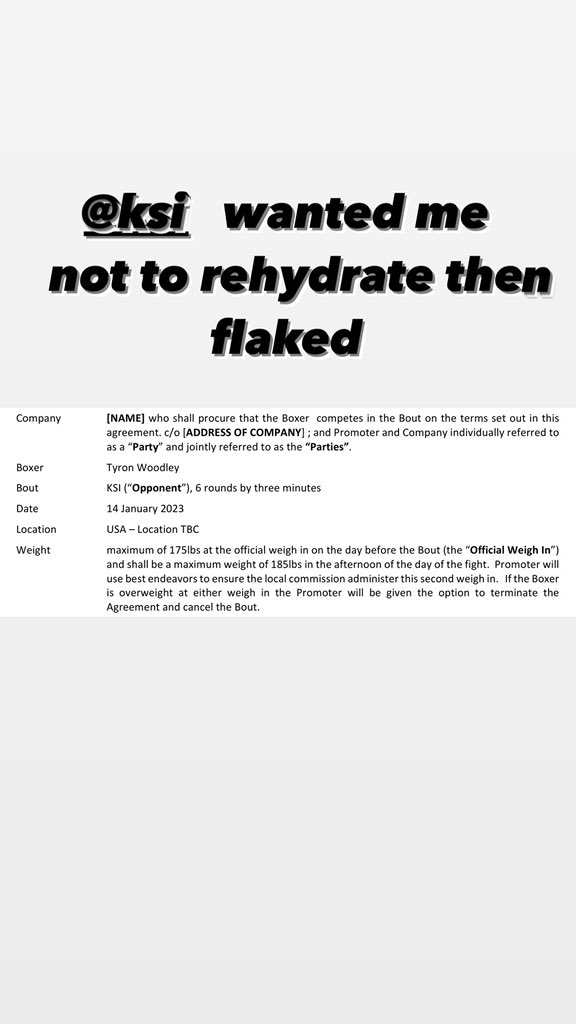 He didn’t stop there either:

“When KSI blames it on Logan Paul and his injury or budget, I have two companies that will fund the purse. Try again. I’m done talking about it. My last post on it.”

Woodley weighed in close to the 190lb mark for both of his defeats by Paul. He walks around 200lbs and more. He is currently 40 years old. 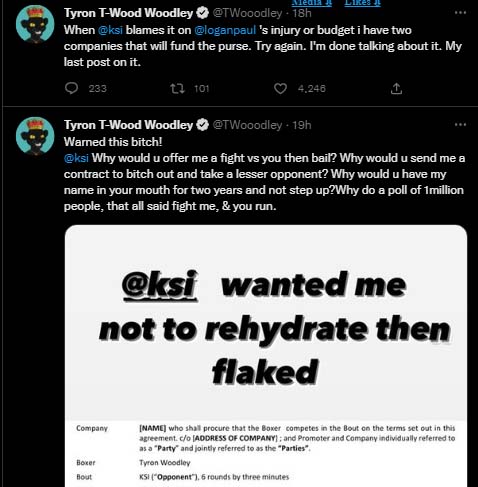 It’s unclear what his immediate plans are from there. Misfits has at least 6 more cards planned.