Couple days back, MMA analyst Brendan Schaub claimed that Jake Paul is deserving for a new rise in popularity of boxing.

As with most of Schaub’s claims – this too can easily be checked and refuted. Paul embarked on his amateur career in August of 2018 and has since gone pro.

As we can observe from google trends – Jake Paul’s career does corelate with rise of interest in boxing – but it’s not necessarily indicative of him moving the general trend upwards. And in many ways boxing is still in a lull period. The one bout that seemed to move general interest toward boxing was that in June of 2021 – which was ahead of the Tyron Woodley showdown in August.

The first bout between Woodley and Paul marked the beginning of a new era for Paul. While Askren was known to be a bad striker, Woodley had actually managed to knock out opponents and was in substantially better shape than his college buddy Askren.

But regardless of having trained striking for a number of years Woodley was fairly stiff. The boxing bout was more of a technical exchange than anything else. Paul towered over Woodley and managed to survive an assault in Round 4 thanks to the handy ropes holding him up. Paul, in turn, outlanded Woodley 71 to 52 according to official stats from Showtime boxing.

“I feel like I won the fight,” Woodley said right after the bout. “I feel like Jake is a great opponent. I came in great shape because I knew he could take a punch. No disrespect but f— the [Tommy] Fury fight, Jake and I can run it back. Nobody is going to sell a PPV like we did. I felt like he was tough. I hit him and the ropes held him up.”

And even though time went by, and the rematch went decisively to Paul, Woodley still maintains he won. In a recent appearance he explained: 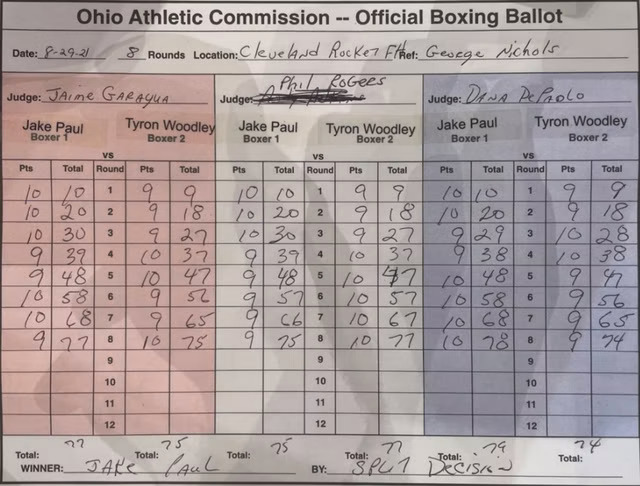