Conor McGregor tapped Dillon Danis to be his training partner and grappling coach after suffering surprising defeat to Nate Diaz back in 2016.

Danis was firmly in McGregor’s camp through his many altercations and even got physically confronted by Khabib after the infamous incident at UFC 229.

Dillon Danis was notably absent from McGregor’s training camps for Poirier bouts due to the fact he underwent two knee reconstructions – he had to undergo a second one after the first one failed.

Fast forward to UFC 281. This past Saturday night, both Nate Diaz and Dillon Danis were in attendance at Madison Square Garden. At which point Diaz went overboard and slapped Dillon Danis’ training partner (who has yet to be named).

Madison Square Garden security stepped in and Diaz was seen getting separated from Danis and a few other people.

Founder of Paradigm Sports Audie Attar tried to diffuse the issue. Diaz seemed to be sympathetic to Attar’s requests. However, Danis’ friend persisted in chirping at Diaz. This enraged the UFC veteran who then smacked him.

However, McGregor wasn’t sympathetic to Danis’ friend. McGregor posted the footage in a since-deleted tweet with the following caption: “Haha nice shot” 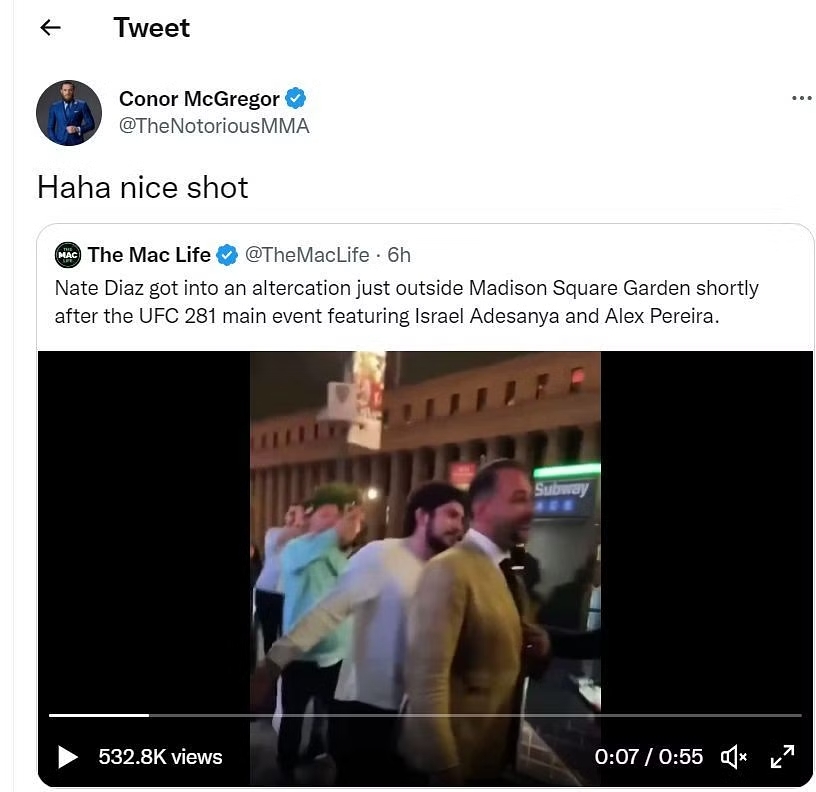 What started the altercation at the UFC event on Saturday night is unknown. Danis and Diaz have not responded to the situation.

Diaz is known for similar incidents. Just this past month, he was escorted out of the venue after he and his team got physical with Paul’s entourage.