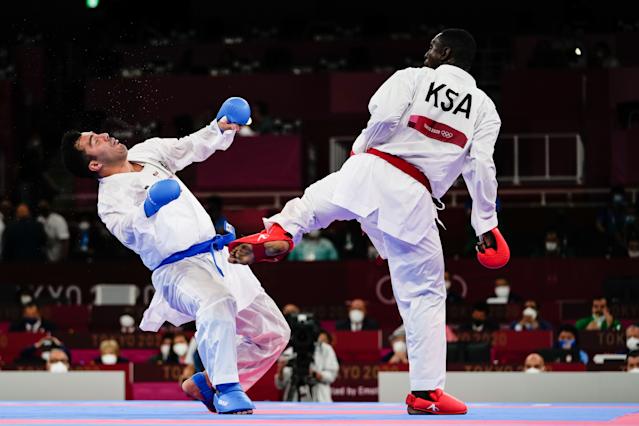 Karate made its Olympic debut last week at the 2021 Olympic games. However the joy of karate fans world wide might be short lived as there are signs this was a one off for the prestigious event that seems to be losing steam in terms of viewers.

One key aspect that has been the deciding factor for inclusion of sports in the event has been entertainment value – and this aspect is so crucial it almost lead to one of the original sports losing their tv spot after hundreds of years of storied history – wrestling.

*In February 2013, the IOC voted to drop wrestling from the Summer Olympic program, effective from 2020. The president of the sport’s governing body, FILA (now United World Wrestling), resigned after a subsequent motion of no confidence, and several of the FILA leadership followed suit. The organization began to make changes to its Olympic program for 2016, including rule changes designed to make bouts faster and encourage more aggression, as well as additional women’s weight classes. These changes were intended to help improve audience interest, and address the shortcomings that likely led to the removal of the sport. These changes were ultimately welcomed with open arms and wrestling had received a guaranteed spot at the 2020 and 2024 events.

When discussing karate the IOC was gravely concerned the martial art was on its sundown and unable to attract viewers. And more importantly young viewers. In many ways advertisers only care for the 18 to 35 demo when it comes to advertising and it has been the pitfall of many television programs in the past. In fact this is so much of a factor that Paris games are set to include Breakdancing (?!) over karate in the 2024 Olympic games.

The official rationale for this decision hasn’t been made public yet.

Regardless of how you feel about Karate, it’s hard not to feel salty about this as a sports fan. Olympic games are a symbol of sports, first and foremost. And unlike its winter counterpart, Summer Olympics are taken seriously and are more likely to be watched for stunning feats of athleticism than social media content.

But to make matters worse Karate was featuring not only one on one duels  called kumite but also a kata category. In this section the athletes were showcasing their art against a virtual opponent of sorts.

Another point of condemnation for karate seems to be the age of competitors. Karate featured one of the oldest Olympic gold winners in 39 year old gold medalist Sandra Sanchez. Considering the inclusion of skateboarding and the teen victors it’s hard to see the long term appeal of karate at the event. After all Olympics already struggles to attract viewers for wrestling and judo.

The controversial ending of the 75kg division certainly didn’t help any. What just happened?

Well it’s simple. In the finale of the division Saudi Arabian competitor Tareg Hamedi turned out to be too efficient in his discipline to receive gold?! Following a spectacular kick finish Hamedi was disqualified and the gold was awarded to his unconscious opponent.

Although the officials didn’t immediately explain their decision publicly, karatekas are not supposed to follow through fully on their strikes in this Olympic version of karate. Highlight-reel strikes that would make mixed martial artists or boxers very rich are considered too dangerous for this sport.

This only adds to the list of reasons why karate is perhaps ill fitting for what the Olympic games have begun. It’s somewhat of an anticlimactic ending for a pursuit for recognition that has lasted over 50 years.