Tito Ortiz has become somewhat of a parody in his MMA retirement. Huntington beach bad boy has expressed a variety of suspect attitudes including blaming the Biden administration for his house getting robbed – despite his own history of robbing houses in his youth.

Ortiz has been in some sort of a middle age crisis even going so far as to claim he boxed Anderson Silva in 1999 and not 2021.

But Ortiz recently made some even more fringe comments. The MMA ace has likened the ongoing war in Ukraine to the US border situation.

Over on truth social, Ortiz shared the following: 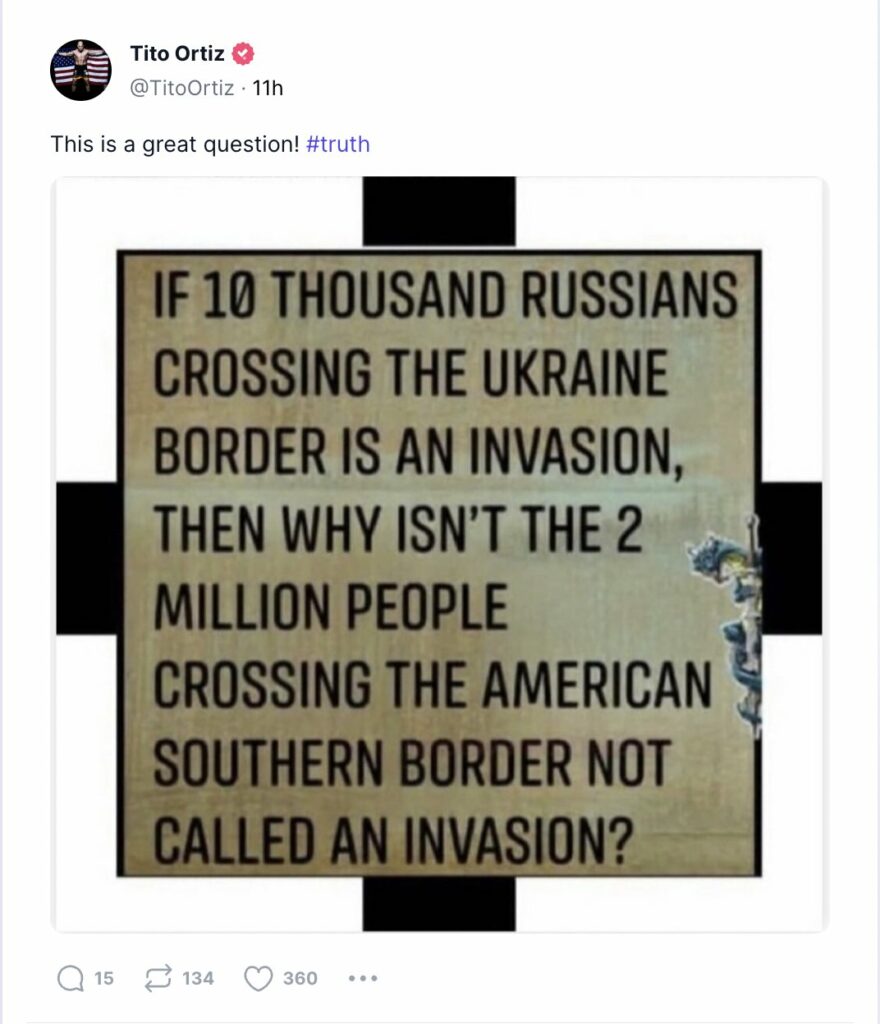 And without getting too political about it – there’s quite a big difference between people illegally immigrating to fulfil the American dream and people coming to conquer your country loaded with weapons killing everything in their sight.

Tito Ortiz, now 47 years old, ‘guaranteed’ a return to the cage by the end of the year in an earlier interview.

Ortiz started, “It’s just preparation. It’s getting in the gym, continuing in the gym and putting in the work. You can’t have a month camp and try to fight in your 40s, you gotta prepare for the six months, seven months.”

“I just started training this week,” Ortiz added. “I’ll fight one more time this year, before the year is over, I want not to go out the way I did against Anderson [Silva].”

This shift comes after Ortiz put his political dreams to rest. Ortiz was previously elected as mayor pro tem of Huntington Beach – and was forced to resign when it came to light that he filed for unemployment during his tenure on the City Council seeking benefits.

Ortiz also owns two Huntington Beach businesses — a gym and an athletic clothing store — and a $4 million home. The application for unemployment benefits warns that making false statements could lead to penalties.

Not to mention he at no point stopped receiving checks for being mayor pro tem despite filing.